Gregory K. Ramirez is a 2020 graduate from the Department of Journalism’s master’s program

What do you do when you can’t decide between majors? 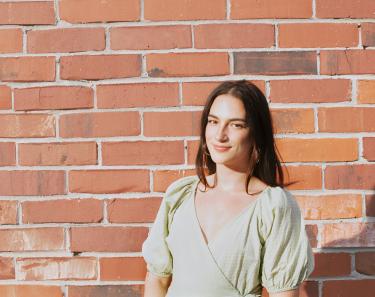 For Sofia Noelle Peña y Lillo, the answer was simple: pursue all three.

This spring, Peña y Lillo graduated with majors in Media Studies, Media Production and Film Studies. As if that weren’t already remarkable, she did so having earned the College of Media, Communication and Information’s William W. White Outstanding Graduate Award in the Department of Media Studies.

The middle child of a Puerto Rican mother and Bolivian father, Peña y Lillo was a first-generation college student––though not the first in her family to attend CU Boulder. Her older sister, Bianca Peña y Lillo, earned her bachelor’s degree in Psychology in 2011.

Reflecting on where her interest in pursuing media began, Peña y Lillo recalls watching The Cove, a documentary about dolphin hunting in Japan, when she was just 11 years old.

"I just remember watching it like five times the first week it came out,” she says. “And I got something different out of it each time.”

“I really enjoy my curiosity and just being like, ‘Let’s try this!’ Whether it works or it doesn’t, either way it’s an experience.​

She was intrigued, she says, by how many different dimensions there were to the story: economic, cultural and ethical

"When I watched it I was far too young, but it’s probably also why I remember it really well,” she says. “I just really love good storytelling that resonates.”

During the five years she spent in college, Peña y Lillo gained hands-on experience as a production assistant and as a student assistant working in CMCI’s equipment vault. In addition, she held down jobs working in a pottery studio and nannying.

“I always needed to hustle on the side and balance working at night or taking night classes or whatever the case may be,” she says. “It felt impossible sometimes.”

Though the coronavirus pandemic has altered her plans, by January, Peña y Lillo hopes to move out of Colorado. She’s currently in the process of securing a work visa in the United Kingdom and eventually, she’d like to work behind-the-scenes as a producer for a film festival.

"I don’t ever want to be in a rut or be too regimented about things,” she says. “I really enjoy my curiosity and just being like, ‘Let’s try this! Whether it works or it doesn’t, either way, it’s an experience.'”