Kiana Village Police Officer Annie Reed, 49, is a grandmother and often the only cop in the Northwest Alaska village of 421 people. (Loren Holmes / Anchorage Daily News)

Photos by Loren Holmes for the Anchorage Daily News

For many of us, this may seem like a theoretical question. But through reporting based on hundreds of public records requests and interviews, Anchorage Daily News Special Projects Editor Kyle Hopkins found that one in three Alaskan communities have no law enforcement of any kind. 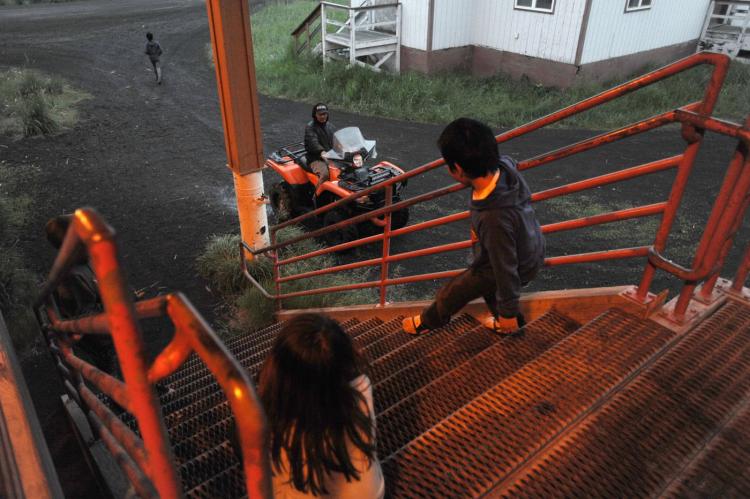 Hopkins’ three-part investigative series “Lawless”––produced in a partnership between the Daily News and ProPublica’s Local Reporting Network––is the winner of this year’s Al Nakkula Award for police reporting, co-sponsored by the Denver Press Club and the University of Colorado Boulder's College of Media, Communication and Information.

In a letter to this year’s judges, Daily News Editor David Hulen and ProPublica Editor-in-Chief Stephen Engelberg wrote that Hopkins went to extraordinary lengths to capture the stark realities of everyday life in these communities.

“Reporter Kyle Hopkins traveled to villages where it is up to the residents to tackle active shooters and restrain them with duct tape, where generations of children were sexually abused by Jesuit priests, and where abusive husbands hide from visiting troopers with impunity,” they wrote.

In addition to communities who have no law enforcement, many others are served by unarmed village officials who receive no benefits, low pay and hardly any training, such as a 49-year-old grandmother who is the sole police officer for an Arctic Circle village of 421 citizens.

Meanwhile, well-trained and well-paid members of the Alaska State Troopers, an agency created to patrol hard-to-reach areas, instead protect mostly white suburbs surrounding road-system cities like Wasilla. According to Hopkins’ reporting, this is because residents in these highly populated regions––home to both current Gov. Mike Dunleavy and former Gov. Sarah Palin––refuse to pay taxes for local law enforcement while rural areas pay the price.

Another standout in this year’s competition is the series “Cops and Robbers,” by Baltimore Sun Reporter Justin Fenton.

The series exposed a culture of corruption within the Baltimore Police Department’s elite Gun Trace Task Force that allowed officers to steal money and drugs from those they were to police, in order to operate a crime ring of their own.

In addition, the judges give special mention to a collaboration with Marquette University’s Public Service Journalism O’Brien Fellowship and the Milwaukee Journal Sentinel that produced the series, “Unsolved: The Devil You Know.” Through both a podcast and written series, Journal Sentinel Criminal Justice Reporter Gina Barton investigated the cold case of Father Alfred Kunz, who was murdered in a rural Wisconsin town in 1998.

“Like the ProPublica assistance, such partnerships, similar to the one that produced last year’s Nakkula winner, help illustrate how outside groups with a desire to help local journalists play an increasingly important role in doing important work for local communities during these challenging times for local newsrooms,” Plunkett says.