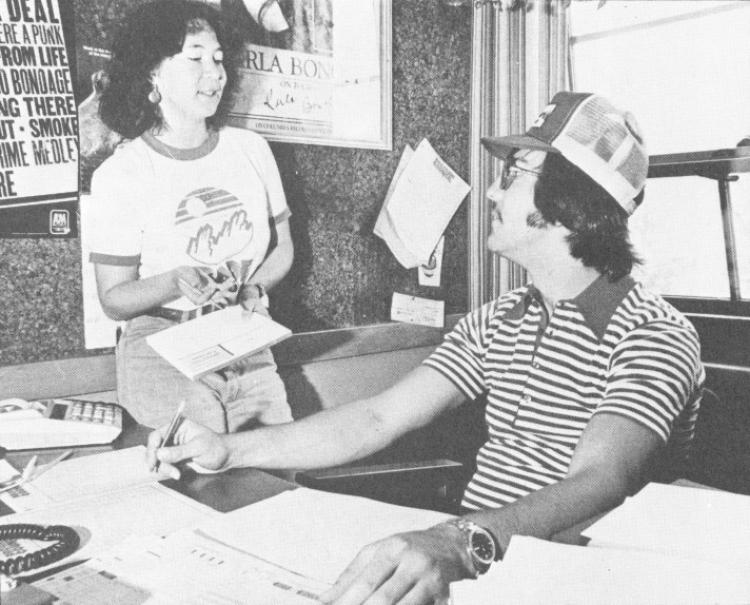 Above: Wendy Kale talks with Nick Camillone in this photo from the University of Colorado 1979 yearbook. The pair worked together at the Program Council, a student-run organization that sponsored and promoted rock concerts and other events.

After beginning her career as a publicist for the CU Program Council, longtime music journalist Wendy Kale (Comm'79) spent almost three decades as a writer for the Colorado Daily. Her work helped to ignite the careers of artists such as Big Head Todd & The Monsters, The Samples, Chris Daniels and more. Deemed Wendy "Rock ’N’ Roll" Kale by many who knew and worked with her, Kale died in 2011 at age 58 of severe acute pneumonia.

This week, Kale is being inducted into the Colorado Music Hall of Fame during a ceremony held Tuesday, Dec. 3, at the Mission Ballroom in Denver. She is the first journalist to ever be inducted. In addition, Kale is a recipient of the Barry Fey Visionary Award, created last year to honor the late Colorado concert promoter Barry Fey.

The Daily Camera recently combined memorial funds for Kale and Kevin Kaufman, the paper's former executive editor who died in February at age 62, into one scholarship aimed at supporting students at CU Boulder's College of Media, Communication and Information. Donate now »

Westword: "Why Wendy Kale Deserves Her Spot in the Colorado Music Hall of Fame"
Wendy spent her entire life on the periphery of fame, rubbing shoulders with stars but never getting to shine. Well, she’s shining now. Read more »