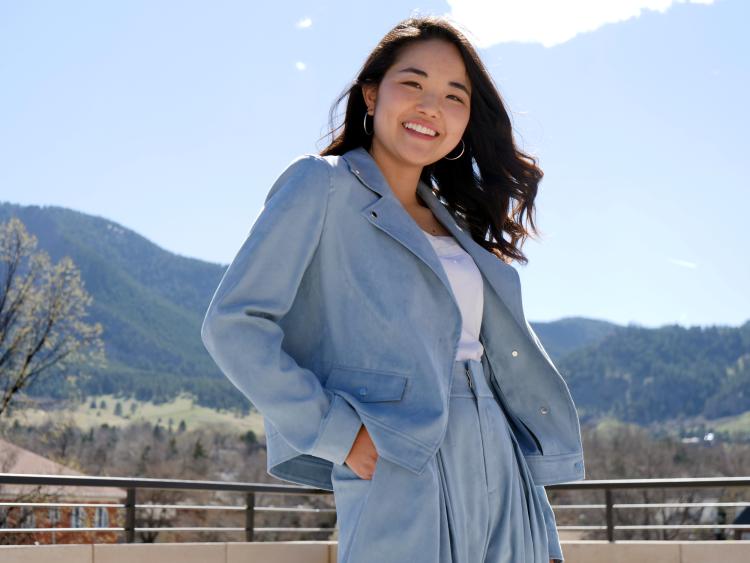 A senior majoring in journalism with minors in Japanese and technology, arts and media, Takahashi will head to Stamford, Connecticut, this summer to work with NBC Sports as an Olympics production fellow.

“The Olympics have been in my family,” she says. “Growing up, my dad worked with Japanese Olympic runners. He and I are both working to be in Tokyo for the Olympics, so it’s really neat that we both get to work toward the same goal.”

Both of Takahashi’s parents were born and raised in Japan. They met while her mother was attending graduate school at CU, and her father was training as a runner in Boulder.

Takahashi followed in her mother and older brother’s footsteps to attend CU, and shared her father’s love for the Olympics. While she knew it was a longshot, she found ways to prepare for the 2020 games throughout her time in college. She spent three years working for Buff Sports Live—CU Boulder’s student-run sports broadcast—and completed internships at a tourism company in Tokyo, KGNU Independent Radio in Boulder, and 9News KUSA in Denver, where she helps produce Next with Kyle Clark.

“I had to learn very quickly how to prioritize everything I wanted to do in my life,” she says.

As she progressed through classes and internships, Takahashi broadened her interests as a journalist. She began to gravitate toward opportunities that allowed her to shine a spotlight on other cultures, and on people whose stories are often under-told, overlooked or misunderstood.

In 2018, she was one of 17 students selected from universities throughout the U.S. for an Asian American Journalists Association VOICES fellowship, where she spent three months reporting on stories of LGBTQ Asian Americans who’d come out to their families.

For her senior honors thesis, she interviewed high-level athletes, sports professionals, sports psychologists, researchers and LGBTQ advocacy leaders about the intersection of gender identity and sports. It’s the type of work she hopes to do professionally: telling human interest stories about the challenges and triumphs athletes experience.

While her time on campus was a whirlwind, to a large extent, her plan worked. One day she opened her email account and found a message from a recruiter at NBC Sports who wrote, “I heard you’re an Olympics fanatic.”

“I think my love for the Olympics was partly because of my dad, but I also think that I was just amazed at how the world comes together every two years to compete, watch and celebrate their nation’s players,” she says. “My motto ever since I was little was that I am ‘mini but mighty,’ and I think that still applies today.”