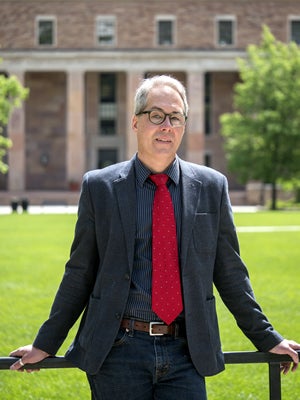 Former Denver Post editorial page editor Chuck Plunkett will join the University of Colorado Boulder this fall as director of CU News Corps, a program of the College of Media, Communication and Information.

He has more than 20 years of experience in state and regional newsrooms in investigative reporting, politics, public policy and breaking news, including as part of the newsroom team that won a Pulitzer Prize in 2013 for breaking news coverage of the Aurora theater shooting

Plunkett was The Denver Post’s lead writer covering Denver’s preparation for and hosting of the 2008 Democratic National Convention. He was editorial page editor of The Denver Post until he resigned in April.

"Chuck Plunkett is known as a Colorado thought leader and champion for journalistic excellence and tackling difficult issues,” said CMCI Dean Lori Bergen. “His years as a writer and editor in newsrooms and on editorial boards bring the depth of experience needed to mentor our students as they partner with professional news organizations on a range of issues."

As director of CU News Corps, Plunkett will be the primary coordinator for the investigative news outlet, which provides package-driven, long-form journalism to several of Colorado’s top professional media organizations. Students enroll in the course for credit and report on key Colorado issues, with previous topics including crime, immigration and political fact checking.

“Chuck had just the right character to be the conscience of our community as he brought out diverse viewpoints on all the issues of our time,” said Dean Singleton, who owned The Denver Post from 1987 to 2013. “CU students will be incredibly lucky to have access to his vast experience and knowledge as they prepare for an exciting future in covering news.”

CU News Corps is supported by Bill and Kathy Scripps, who established a $2.5 million endowment in 2017. The program began in 2012 as a small team of students reporting on breaking news and partnering with local media.

Starting in the fall, the CU News Corps course will serve as the required capstone course for all entering journalism students. It will eventually enroll 60 to 70 students per semester.

In 2014, Plunkett created and taught a pilot program at the University of Denver called “Fact Lab” that worked with upper-level students to fact check political messaging in campaign ads for the 2014 election season. The Denver Post published the students’ work on its politics blog, The Spot, and excerpts in its paper editions.

“I loved working in newsrooms, and I didn't want to leave them. But it is also true that, before I started my career in journalism, I hoped to find myself teaching in university classrooms. Over the years I've often thought longingly about returning to the academy and its mission. The CU News Corps program offers incredible opportunities to help train the next generation of journalists and maintain that connection to the profession that has defined my adult life.” —Chuck Plunkett

The College of Media, Communication and Information opened in the fall of 2015 with six academic departments, including the Department of Communication and programs of the former School of Journalism. The first new college on campus in more than 50 years, CMCI takes an interdisciplinary approach to media, communication and information education that is enriched by data and immersive technologies.