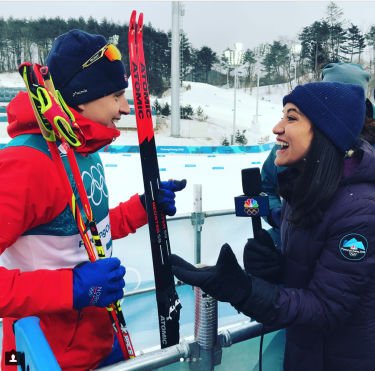 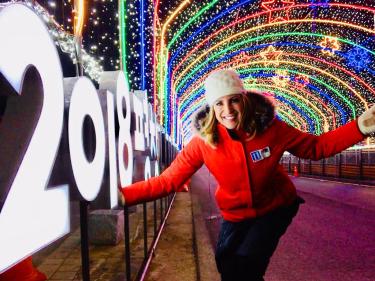 Cheryl at the Tunnel of Lights near the Olympic Stadium in South Korea. Photo is from her Twitter.

The 2018 Winter Games are in full swing, and two CMCI alumni are in on the action. Alums Cheryl Preheim (Comm’95) and Abby Chin (Jour’03) are both at the games reporting live from PyeongChang, South Korea.

Preheim is veteran reporter and news anchor who spent 18 years at 9News Denver before moving to a sister station, WXIA, in Atlanta, Georgia. She is currently reporting on the Olympics at large for WXIA. In addition to contributing regular coverage of the games, she is also maintaining a running blog of her interviews and adventures around PyeongChang.

While Preheim has covered multiple Olympic games, this is Chin’s first time reporting at the Olympics.

Chin, who normally serves as a courtside reporter covering the Boston Celtics for NBC Sports, is contributing national reporting on the 2018 games. Specifically, she’s covering the cross-country skiing and ski jumping events.