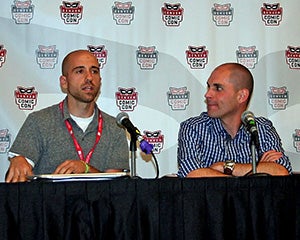 Jared Browsh and Gino Canella presented together on a panel at Denver Comic Con.

Continuing a tradition established in 2012, University of Colorado Boulder faculty members, students and staff presented at the 2016 Denver Comic Con and its associated literary conference, Page 23. Members of CU-Boulder’s media studies and English departments presented on topics such as gender representation in popular media, action figure culture and the racial politics in recent Superman comics.

“It was fun to work in that kind of venue” said Gino Canella, a media studies PhD student whose presentation, “Superman’s Racial Politics: Black Lives Matter, Protest Policing and the Ethnic Other” examined the role of comic books, modern social movements and how popular media  contributes to public discourse. Canella enjoyed presenting and found that both presenters and fans shared a passion for digging deeper into the media they love.

“[At Comic Con] we’re really talking about a lot of the same things that we’re studying and talking about in media studies and so I think the complement and the fit was pretty obvious.” 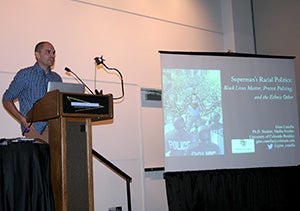 Gino Canella presents his research during the panel.

Canella was joined at the event by fellow media studies PhD students Jared Browsh, who presented on “Capitalization in a Half-Shell: Multimedia, Cross-Demographic of Animated Content from Mickey to Michelangelo” as well as Arthur Bamford and Colin Ackerman who talked about audience research in comics scholarship.

Rick Stevens, an associate professor of media studies, and Christopher Bell, an alumnus of the media studies department, spoke on a panel about the manufacture and collection of action figures, especially the growing market for female action figures. Stevens was also joined by alumna Shannon Sindorf for a panel on superhero gender representation.

Stevens relished the chance to bring a media studies perspective to the comic book community. “One of our goals by coming into that community is to participate, but also to ask questions in a way that have people think about ‘why do you like this?’ ‘Why do you not like that?’ ‘Why does this particular hero speak to you?’”

He said the event represented a particularly valuable opportunity for graduate students, who were pushed to discuss such questions with a general audience. “These young scholars are not just communicating to people that know their scholarship. They’re having to talk to somebody who may have no reference to how we do things. And that’s a good experience for them because this is what we hope they do throughout their career.”