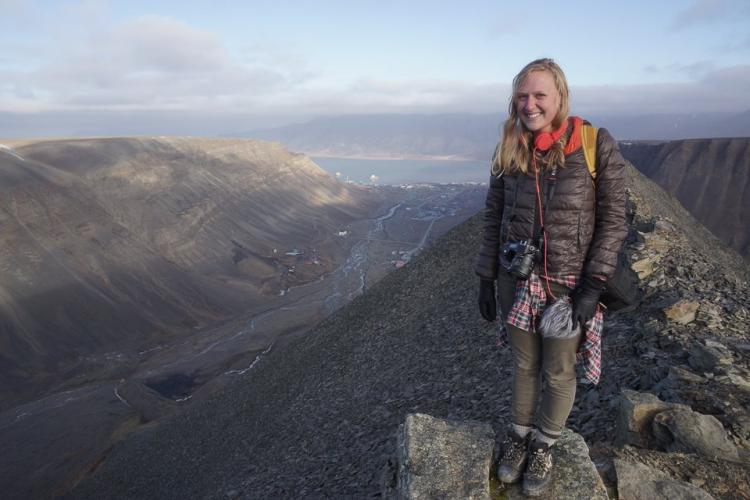 Kelsey Ray stands on a knife-edge ridge high above the town of Longyearbyen in the Arctic archipelago of Svalbard.. Photo by Tom Yulsman.

On each of the 10 nights I spent in Svalbard, I slept a little less.

The first morning, I attributed my giddy, wide-eyed sunrise grin to jet lag and bounded out to my Norwegian breakfast—fresh bread, pickled herring and that fabled ‘brown cheese’—with coat unzipped and boots untied. But even as I adjusted to the time difference, it became clear that neither early morning glacial treks nor daylong boat journeys could keep me from grabbing my camera and recorder at day’s end, hoping to learn and see just a little more. Even long, cold nights spent seeking the Aurora Borealis couldn’t dampen my early-to-rise spirits. In Svalbard, I discovered, enchantment conquers sleep.

I visited Svalbard, an island chain in the Arctic Ocean, to take part in a pilot climate change journalism course organized by American and Norwegian professors in September 2015. Next September, three more master’s students from the Center for Environmental Journalism (CEJ) will travel north with Tom Yulsman, the Center's director, and Michael Kodas, the Center's associate director, to explore the Arctic archipelago that scientists call “ground zero” of climate change.

As a participant in a newly-awarded $35,000 grant from the Norwegian Centre for International Cooperation in Education, the CEJ team will be working with Norwegian colleagues to implement a new climate change journalism program called Arctic Lenses.

The effects of a changing climate are most visible in the Arctic, where temperatures are rising at twice the global rate. New sea routes and rich oil reserves, exposed by melting ice, have made this historically harsh region more desirable to countries preparing for a warming world. 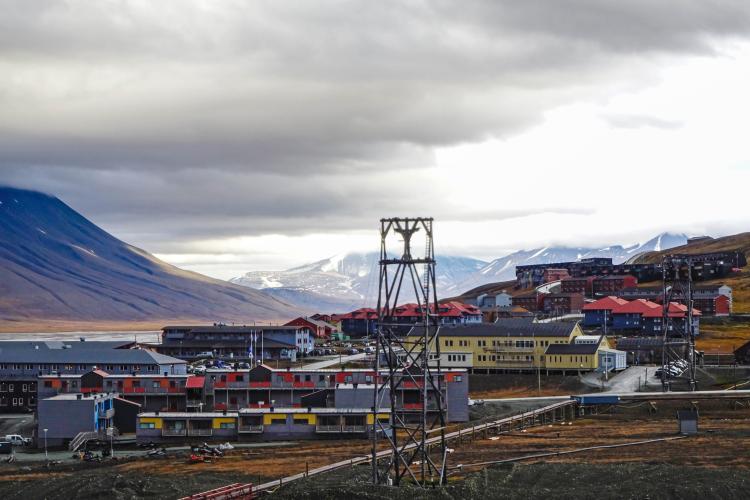 The de facto capitol of Svalbard, Longyearbyen. The tower in the foreground is part of a now derelict cable system that was used to convey coal from the mines to the town for transport out of Svalbard by boat. Photo by Kelsey Ray.

Funded by the new program, students will spend a week exploring Svalbard’s de facto capital, Longyearbyen—a settlement home to more polar bears than people—and then fly even further north to visit an international atmospheric research station. Yulsman and a Norwegian professor will guide the program’s participants as they study and report on the complexities and contradictions of a warming Arctic.

Students will also hike nearby glaciers, eat the local cuisine—whale, seal and reindeer are often on the menu—and interview residents who hail from countries around the world. They’ll hear from renowned scientists, tour abandoned coal mines and try to catch a glimpse of the Northern Lights.

In all likelihood, they won’t sleep much.

Kelsey Ray will complete her master’s degree in journalism at CU-Boulder this summer. She covers immigration and the environment as an intern at the Colorado Independent. Her work has also appeared in High Country News and on CUNewsCorps.com.