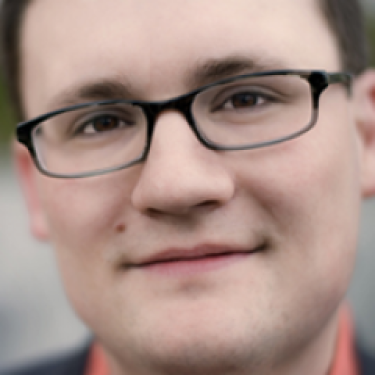 Hunter Ewen, an instructor in the Department of Critical Media Practices, has received grants to fund two new projects that explore new technologies in sound collection and LED art.

"Both of these grants come back to a central theme of my research and creative work—exploring new ways of visualizing sound. Though drones and long-exposure photography may seem like disparate projects, I see them as critically important to the advancement of visualization and sound-art in the 21st century." —Hunter Ewen

Ewen received a $4,000 grant from the Integrated Remote and In Situ Sensing Initiative (IRISS)'s Project Society to pursue research and creative work focused on using drones as sound collection tools. His project will involve designing and testing recording rigs that minimize audio interference in collaboration with students from IRISS and DCMP, creating a workflow for soundscape artists and acoustic ecologists to integrate drones into their own work and creating original sound-art using drone-captured recordings. The project should be completed in spring 2017.

IRISS is a new multidisciplinary team at CU-Boulder, created in support of the Grand Challenge initiative. Part of IRISS’s mission is to "lead the design, development and deployment of novel remote and in-situ sensing systems to exploit mobility enabled by aerospace systems."

Ewen also received a $3,000 grant from the Graduate Committee on the Arts and Humanities to pursue his most recent project, LEDpaint—a sonic and visual art installation that explores the relationship between sound and visualization. This project combines e-textile design, photography, sound technology, music composition and dance in a series of still images, paired with their associated sounds. LEDpaint represents an exciting new opportunity for CMCI to collaborate with faculty, students and staff from the ATLAS Institute, the College of Music and the Department of Theater & Dance. 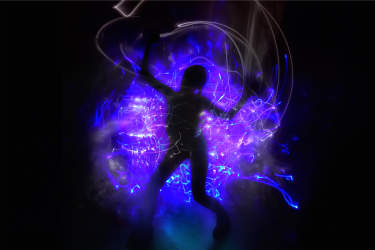 The images are long-exposure, single-subject photographs, shot in the dark and lit only by the LED lights worn and used by performers. The subjects of these shoots are dancers, musicians and movement-artists. With his team, Ewen is developing light-up gloves, leggings, dresses, shirts and shoes that will allow the subjects to perform unencumbered by the LEDs. The works will be largely dominated by abstract trails of LED lights, which trace the movements of a performer during an exposure. As performers pluck, strike, spin, jump and play, the sounds of their actions are recorded—to be played alongside the photographs in the installation.

This project is also expected to be finished in spring 2017.