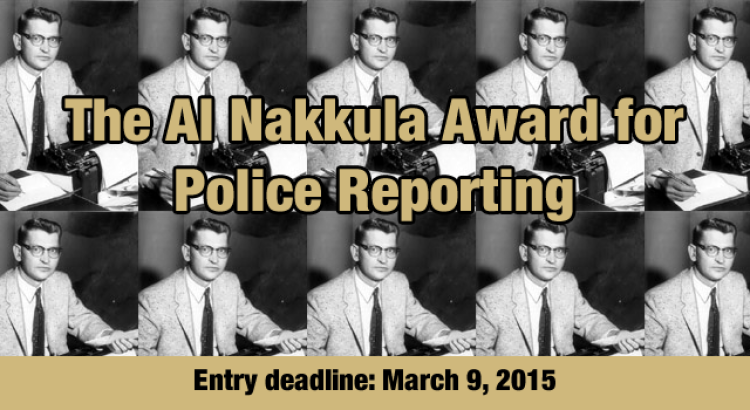 Entry deadline for the 2015 Al Nakkula Award for outstanding police reporting is March 9, 2015. Late entries will not be accepted. The award is co-sponsored by the University of Colorado College of Media, Communication and Information and the Denver Press Club.

Entries should take the form of a story or series about one topic and/or event. They must be in electronic form, submitted to buffjournalism@gmail.com. Entries should include PDFs of the relevant stories or urls (if readily available to multiple judges regardless of paywall). Please also attach a cover letter of nomination, which may be from the entrant and/or his/her sponsoring publication.

The entry fee is $75 and the first-place prize is $2,000. The award is for work produced in print and/or online platforms in the United States in 2014. The winner will be invited to speak to classes at the University of Colorado College of Media, Communication and Information on Thursday, April 23, 2015 and to accept the award at the Denver Press Club’s Damon Runyon dinner on April 24, 2015. The second-place finisher will receive a certificate of merit. Sorry, this award is not for broadcast work.

The Nakkula Award is named for the late Al Nakkula, a 46-year veteran of the Rocky Mountain News, whose bulldog tenacity made him a legendary police reporter.

2012 Winner:
“Both Sides of the Law”
Gina Barton
The Milwaukee Journal-Sentinel