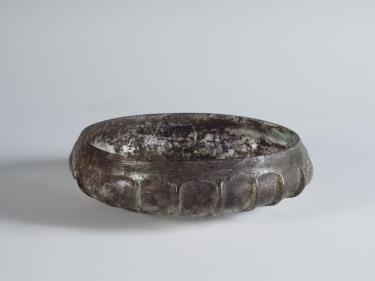 Description: Unworked lip on shallow bowl with somewhat sagged profile. 21 pillar-molded ribs descend from pronounced shoulder to flat base of vessel. Much iridescence and flaking, to the extent that the original color is not discernable (at present it is several shades of brown). Sagged (i.e., heated on a dome-shaped mold).

Comment: The weathering of this bowl has been extensive and it has been abused in other ways, as indicated by a patch of glue-like substance on side. Nevertheless, the shape and what remains of the original coloring suggests this bowl may be mosaic (cf. Eisen 1927, pl. 32; von Saldern 1968, no. 12). Other examples of this shape are Hayes 1975, no. 50 and Grose 1989, no. 232.

The shape of this bowl was not determined by free-blowing, mold-blowing, or core-forming. It was made through a process called "sagging" or "slumping". This shaping technique involves taking a flat disk or sheet of pliable glass and placing it on top of a solid mold to form the shape and design on the interior of the vessel. Then the glass is worked as it lays "slumped" or "sagged" over the dome-shaped mold to create a design on the exterior of the vessel. This process means that this bowl was worked while upside down (1).

This bowl may have been made of mosaic glass, which is made from many small pieces of glass fused together in a kiln. The glass bits are laid side by side in a disk shape on a paddle, which is slid into a hot kiln. When the disk comes out of the kiln hot and pliable, the glass is all pressed together to form one circular sheet of glass. Then the flat glass is sagged to the bowl mold (2).