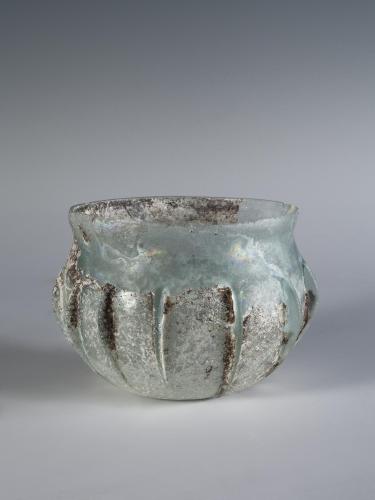 Description: Everted rim with unworked edge turning in at top. Slight shoulder. Body bulges out in center. Pinched-out ribs extening from just above middle of body to underside of base. Flat bottom. Pale greenish tint. Some iridescence and a great deal of white incrustation. Mold-blown.

Ribbed bowls belong to Grose's Group C (1). These bowls are differentiated from ther grooved and fluted bowls in Grose's Groups A and B by the flat or slightly concave bottom. Their self-supporting nature meant that they could serve as either luxury or daily use tablewares, while the ribbed sides provided a solid grip. The ribs were likely formed by pinching the glass with a tool while it is still soft enough to shape. Vertical ribs are very common on Roman glass, as it is a simple decorative technique that is quickly and easily accomplished (2).

Ribbed bowls originated in the Eastern Mediterranean, but they soon spread throughout western Europe in ways that other bowl types did not and they were standard in the entire Roman Empire from the 1st century B.C.E. to the late 1st century C.E. (3).

The pale green tint of this glass bowl comes from a small amount of natural metal in the ingredients. All sand used for making glass has a very small percentage of metals in it. Green glass is caused by one to three percent of iron mixed in with the sand. It is uncertain how much the ancient Roman glassmakers could control the tint of the glass, but they knew which metals caused which colors (4). During the height of the Roman Empire, colorless glass became more and more desirable. The less tinted the glass was with color, the more expensive it was (5).

This bowl was not free-blown or core-formed; it was shaped using a mold, either through by a process called mold-blowing or perhaps by sagging or slumping. Mold-blowing was invented around 25 C.E. (6). Hot, pliable glass is gathered at the end of a pipe by the glass-blower, while another person closes a two-piece mold around the glass that is stuck to the pipe. Then the glass is inflated while trapped within the hollow mold, so that it takes on the pre-determined design and shape. Once the glass has cooled and hardened, the mold is opened up to reveal the finished bowl or bottle. Sagging, on the other hand, involved sagging or slumping a disk of softened glass over a mold. Molds could be made out of fired clay, plaster, wood, or stone. They were very convenient because they were reusable: a glass-blower could produce many glass bowls all with the same shape and design from a single mold. Many Roman glass vases have vertical marks from where the two halves of the mold met (7).