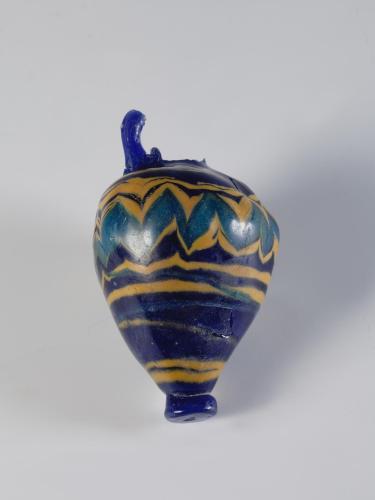 Description: Mouth, neck, and part of handle missing. Preserved section of handle attached to top of shoulder. Body ovoid with flat base knob. Royal blue body with opaque aqua and yellow-orange zigzag pattern. One unmarvered yellow-orange stripe at the top of zigzag pattern, two more below, and one at base of vessel (very similar to the coloring of Schlick-Nolte 2002, no. V-11). Body repaired with wax or hot glue. Core-formed (i.e., hot glass is applied to a removable core, either by dipping or trailing threads of glass over the core as it rotates). Handles and base knob applied separately.

The original museum record of this vessel indicates that the neck was missing at the time of accessioning, but makes no mention of the body being broken, suggesting this damage occurred since 1969.

This colorful vessel has the characteristic design and decoration of many other glass pieces from the same time period. In Egypt, Rhodes, and all over the Eastern Mediterranean, blue, yellow, white and turquoise glass bottles were being produced and traded (2). The bright blue that makes up the majority of this vessel's surface may have been meant to imitate either blue marble (also called anhydrite), which was a popular material for stone vessels (3), or a blue stone called lapis lazuli (4).

The amphoriskos in the CU Art Museum collection was not blown into shape like most later glass vases, but instead was manufactured by a method called core-forming. This means that the shape of the piece comes from a core that was dipped or wrapped in pliable, melted glass. The core was likely made out clay and dung (5), which would be stuck at the end of a long rod and then dipped into the base glass, which appears blue in this vase. Then, melted glass strands would be wound around the core to create the yellow, white, and turquoise bands that were so popular. The vase would then be rubbed smooth until all the colors were integrated. To create the zig-zag effect, the glass would be combed with a pointed instrument to drag the colored bands up and down (6). Once the glass was cooled and set, the organic core would be scraped out, leaving only the shaped vessel (7).

This amphoriskos has some unfortunate damage to the mouth and neck. Amphoriskoi held scented oils and perfumes and were very common vases in the Mediterranean world from about 525 B.C.E. to 50 B.C.E. The manufacture and trade of perfumes was an essential industry to the Egyptians and the Rhodians. Other popular shapes included aryballoi and alabastra, both also used for carrying scented oils and perfumes (8).