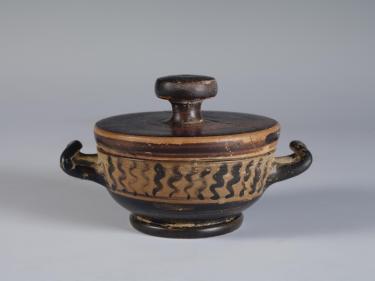 Additional photos of this vessel show details of its base, lid, and decorative elements.

This small vase is an example of a lidded lekanis (plural: lekanides). A lekanis consists of two parts: a shallow lid with a large, flat knob which could be turned over and used as a plate, coupled with a small shallow bowl to which were attached two horizontal, ribbon-like handles, a low footed base, and a rim with a ledge to receive the lid. A similar shape, also a shallow bowl but without a lid, is called a lekane, although the application of the related names is not entirely clear and modern usage varies. 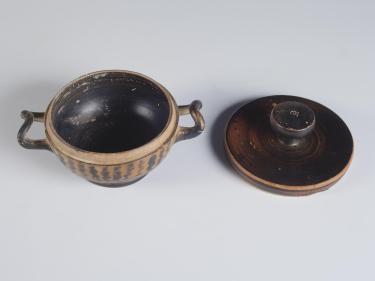 A lidded lekanis was generally used as a cosmetic container or as a gift for brides, given by their fathers on their wedding day and filled with trinkets (1). The lekanis is similar in function to the small round box called a pyxis, which was also used for cosmetics and small items of adornment. The lekanis had a wide variety of uses and its shape could vary. Because of their utilitarian and symbolic functions, lekanides are often found in burials, as is the case with most of the vases in the CU Art Museum's collection.

Lekanides were widely used throughout the Archaic period, only losing popularity in the 4th century B.C.E.

The decoration found on this lekanis is relatively simple. The lid and handle are covered in a dark brownish-black slip, with the outside of the rim of the lid reserved in what seems to be the original dark orange color of the clay. In this case, the slip found on the lid was applied unevenly, causing the black slip to fire to a dark brownish-red. In the process of producing pottery and terracotta figurines, "the perfect glaze is a deep, lustrous black, but . . . imperfect final reduction or too thin an application of glaze results in the frequent phenomenon, a reddish or brownish or unevenly colored glaze" (2). The inside of the bowl of this lekanis is completely covered in slip, as well, but retains a more even color.

A wide horizontal band of light buff brown slip encircles the exterior of the bowl. Inside the band and between the handles on each side are vertical black zigzags, drawn hastily (3). A similar pattern can be seen on a later 8th century B.C.E. Boeotian pedestal skyphos in the CU Art Museum's collection. This style of decoration has been associated with Chalcidian workshops in northern Greece (4) but this particular lekanis may be Boeotian in origin. Bordering the zigzags on the bottom is a thin black line above a narrow band in the color of the buff brown slip. The base of the lekanis, including a low ringed foot, is covered in a dark slip. The underside of the foot is the buff brown slip, with small black dot in the center surrounded by two thin black concentric circles. Much of the exterior surface of the lekanis and the interior of the lid are discolored by a yellowish deposit.

Although the shape of the lekanis is easy to identify, its origin and date are more difficult due to its popular and simple decoration and uneven and misfired slip. Furthermore, the dimensions of this vase are small when compared to more common examples of the lekanis (5). Finally, the handles on this example are thinner than we see in other examples, and their upward curve resembles the handles of a kylix, such as the c. 500 B.C.E. example in the CU Art Museum's collection, rather than the more usual handles of a lekanis, which are thick and horizontal.  Horizontal handles more typical of lekanides. Examples of these upward-curving handles on a lekanis, however, are not unknown (6).

In most cases, assigning a date and place of origin to a vase results from a combined study of its shape, size, and decoration, along with other aspects unique to the artifact. Often, archaeologists look to the color of the vessel's clay in order to determine the location of its production. This type of identification is possible because of the ready availability of local clay sources in Greece, many of which had noticeably different colors (7).

In the case of this lekanis, however, the identification of the clay color is difficult: the entire surface is covered in either a light or a dark brown slip. A small crack in the lid could provide a view to the original clay fabric, but a yellowish deposit covers much of the vessel. The most basic color of the clay of this lekanis, orange, can be found in regions like Boeotia in central Greece, as well as in Attica, but it is not possible at this point to determine a more specific place of origin.

Furthermore, the decorations on this lekanis, especially the zigzag pattern on the body, are difficult to identify as belonging to a particular region in Greece. Examples of similar decoration have been found on vases from all oer Greece, including Boeotia, Euboea (8), Attica, and Corinth.

With the limited amount of currently available evidence, then, it is premature to commit to a positive identification of the vessel's origin. This lekanis is an example of the difficulties researchers face when trying to identify unique artifacts and reflects the reality of pottery as widely varied and often complicated remains in the archaeological record.