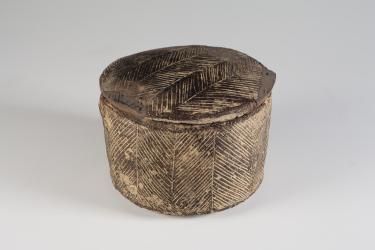 Description: Unevenly handmade round container with flat base and straight sides. Round lid with slightly domed surface. Two small horizontal lugs, pierced vertically, extend from opposite sides of the lip of the vessel. Brown glazed surface with incised linear patterns covering vessel body and lid.

Additional photos of this vessel show details of the small lugs, interior, decoration, and lid. 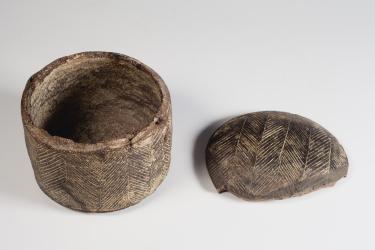 This cylindrical incised ware pyxis is made from a gritty, brownish-gray clay. It is thick-walled with a flat bottom, vertical sides, and a slightly domed lid (1). It has two vertical small lugs, pierced vertically, that were probably threaded with a string or cord. Sixteen vertical incised lines divide the surface of the body into vertical zones of unequal width. Within each zone diagonal lines are incised; the angle of the lines is consistent within each zone, but alternates between zones to create an overall zigzag pattern around the body of the vessel (2). This design pattern is called "herringbone" (3).

A pyxis (plural: pyxides) is a small box with a lid made of clay. Pyxides were probably used as containers for cosmetics, trinkets, or other small objects.

The techniques used to create this pot are not well documented; what we do know, however, is that these pots were made by hand rather than thrown on a potter's wheel. The incised lines were added when the clay was still wet or at least in a leather-hard state. Incised decoration is relatively common in Minoan pottery from Crete, as well as in earlier Cycladic pottery, especially in this herringbone design (4). Often the incisions were enhanced with a white chalk-like substance to enhance their appearance.

It is likely that this pyxis was used as an offering in a tomb. In general, pottery found in tombs tends to be more decorated and to be confined to a more limited range of shapes than settlement pottery, that is, pottery found in the areas where people resided, lived, and worked. Some shapes are, in fact, rarely found outside of graves, including cylindrical pyxides like this one (5). What is more, vessels are are less well-made and poorly fired, such as this one, are more likely to have been made for a funerary use, as they did not need to stand up to daily wear-and-tear (6). This pot, then, seems to meet most of the requirements to be identified as a funerary offering: it is highly decorated, but not as well-made as an everyday vessel.