Dr. Kiplinger has been pursuing research on solar activity in differing wavelength regimes from microwaves to gamma rays. An objective of these efforts is to combine X-ray and other data on solar flares, coronal mass ejections and interplanetary particle events in order to obtain a more comprehensive recogniton of signatures and understanding of interplanetary proton events. An important part of these efforts is to investigate if signatures seen in hard X-rays and microwaves can lead to better predictions of interplanetary proton events which could be dangerous to astronauts and spacecraft.

The major impetus behind this work and the proposal is the previously discovered strong correlation between a particular type of hard X-ray signature seen in spectral evolutions and interplanetary proton events. The basic signature is that hard X-ray flux peaks either exhibit spectra that soften on their decays (i.e. show fewer and fewer high energy X-rays with time) or harden during decays (i.e. high energy X-rays decay significantly slower that lower energy X-rays). This signature is called "progressive hardening". Studies were conducted over an eight-year period of data from the Hard X-Ray Burst Spectrometer (HXRBS) of the Solar maximum mission. Out of the 750 well observed flares studied, 41 flares had major associated proton events. Of these, 29 events were "predicted" on the basis of progressive hardening for a hit rate of 71%. The 152 largest flares had a hit rate of "predicting" proton events of 82%. Microwaves comprise one wavelength range which has been pursued with new instrumentation. Data from the Solar Radio Burst Locator telescopes (SRBL) was first explored. The inclusion of microwave observations stems from the fact that both hard X-rays and microwaves sample much of the same population of high energy electrons; thus, microwaves can serve as a surrogate for hard X-ray observations and potentially detect progressive spectral hardening. A problem with geosynchrotron microwaves emitted in strong magnetic fields is that they become optically thick (opaque) and the true nature of the source is masked. However, at sufficiently high frequencies, the source becomes optically thin (transparent) and the entire source of emitting electrons can be seen and measured. The P.I. has noted in many flares that occur when progressive spectral hardening is seen in hard X-rays, but it is also seen on decays of microwave bursts at high frequencies. Thus microwave observations have the potential to aid in predicting or "nowcasting" interplanetary proton events.

The SRBL instrument was designed by Dr. Gordon Hurford (who designed the principal and many detailed aspects of RHESSI) to utilize a small 2m microwave dish to measure solar radio fluxes as well as determine source positions in efforts to augment solar monitoring and forecasting. SRBL observes more than 100 frequencies from 1 – 18 gHz . Its development was funded by the U.S.A.F. and was intended for worldwide deployment and continuous coverage. Kiplinger saw this as an opportunity for continuous surveillance of progressive spectral hardening. After years of development and SRBL had met its requirements, the U.S.A.F. cancelled the program in 2003. Only the prototype at Owens Valley Radio Observatory and the first production instrument, now at Holloman, New Mexico are in operation, but little useful scientific data has been produced since the new millennia.

However, a significantly better, yet similar instrument exists. This instrument is the Owens Valley Solar Array (OVSA). It covers the same microwave frequency frequencies as SRBL with essentially the same detectors. It began limited operation in 1999, but since 2001 it has had a complement of three small 2 meter dishes that form 7 baselines with two large 35 meter dishes. Thus it has much more sensitivity than SRBL. With regard to associations with major proton events, OVSA observed three in 2001 –one remained opaque (optically thick, hence unmeasurable), one shows some evidence for spectral hardening but the third flare (04 November, 2001) shows clear evidence for progressive hardening on flux peaks. Also associated with this flare was a halo coronal mass ejection, an X1 soft X-ray flare and strong proton fluxes observed at Earth. In 2002, OVSA observed two proton associated events, one of which had good overlap with coverage by the Ramaty High Energy Solar Spectroscopic Imager (RHESSI). Another, similar event observed in 2003 holds considerable promise for progressive hardening. It is likely that the proof of concept originally conceived for SRBL data may be accomplished from OVSA data.

Another wavelength under scrutiny is optical and in particular hydrogen alpha or Halpha. Originally, the emphasis was on polarization observations with the High Speed H-alpha Camera/Polarimeter located on the Boulder Campus. In 2003, RHESSI P.I Bob Lin and Brian Dennis both expressed interest in additional H-alpha support from the P.I. Some Hi Speed Camera data has been obtained but it has been limited. An alternative approach to H-alpha observations has been utilization of the U.S.A.F.'s Solar Optical Observing Network (SOON). Since 1994, the P.I. has been collecting worldwide H-alpha observations from SOON. The system is named "SOONSPOT" where the "SPOT" stands for Solar Patrol On Tape. In 2004, the SOON system employed 3 U.S. Air Force SOON observatories located in New Mexico, Australia and Italy. Each site records full disk Ha images every 30 minutes and large scale H-alpha images of active regions or other features every five minutes (or 30s during flares). Originally, Exabyte recorders were installed at the five SOON telescopes around the world. Data has been received in Boulder and at Lockheed's LMSAL, who constructed and maintained the online catalog. Lockheed's involvement ceased in 2001 and tapes began accumulating in Boulder. One goal has been to support RHESSI and the general scientific community with this data by continuing this archival process. Using undergraduate student support, SOONSPOT data for flares observed by RHESSI in 2002 and 2003 was transferred to hard disk for more convenient access than tapes provided. Over time the Exabyte drives have been becoming less and less reliable. It is for this reason that new data is being recorded on DVD's instead of tapes. A DVD burner was installed in 2005 at Holloman, New Mexico and data has been successfully read at Boulder. DVD burners are now installed at all three SOON sites. This will make data retrieval and cataloging far more convenient due to the random access of the DVD medium. In 2004, a new Memorandum of Understanding was approved and signed by the U.S. Air Force, the NOAA Space Environment Center and the University of Colorado to continue the SOONSPOT archival program. 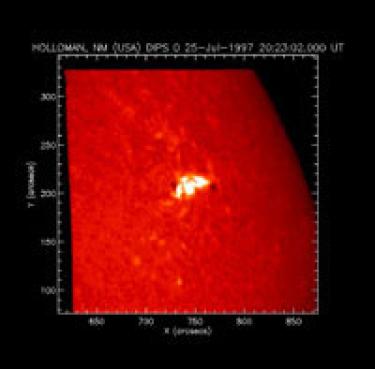 Figure 22: A solar flare and wave event recovered from the SOONSPOT data. The points of light in straight lines proceeding from the main flare site may be the footpoints of large coronal loops tearing away from the sun and the source of coronal mass ejections (CMEs).

One research focus of these optical observations are the detection of flarewaves that appear to be associated with progressively hardening hard x-ray signatures, CME's and interplanetary proton events. Differing examples of flare waves are presented in the CIPS reports for 2003 and 2004 and are not repeated here. Another example of a flare wave recovered from the SOONSPOT data is almost identical to the wave reported in the 2004 CIPS report and by Balasubramaniam et al. (2005). This event occurred on 25 July, 1997 and had an associated CME, proton event and is shown in Figure 22.

Classical Moreton waves which proceed from major flares appear as moving, expanding circular arcs subtending tens of degrees. Conversely, this new type of wave disturbances appear to be focused and only subtend narrow angles. Thus a Moreton wave is analogous to a wave produced by someone throwing a large stone into a pond, while these waves are reminiscent of someone skipping stones across a pond at different times and in different directions. The traces of these point brightening proceed from the flare site outwardly in radial directions and are seen in Figure 22 extending downward and to the left. Although few such events are known, it is postulated that the brightpoints are the footpoints of large coronal loops that are tearing away from the sun.

A second interesting type of flare phenomena are occurrences of "sigmoid" type flares. An excellent example also recovered from the SOONSPOT data is shown in Figure 23. This type of event exhibits an "s" shape with its classic two ribbon flare in the middle and two bright endpoints. These events are often accompanied by CMEs, proton events, and coronal "dimmings" as seen in the extreme ultraviolet. This flare had all of those characteristics. By many, the flare is considered to be the result of the buoyant emergence of a single loop of magnetic flux. The bright points at either end of the flare are believed to be the actual footpoints of the loop and the sources of the enormous electric currents that drive the flare.

Kiplinger has also developed the means to display SOONSPOT data over the Web as movies by working with Lockheed programmer Sam Freeland. Using major building blocks by others, the Java movies have features of forward, reverse, zoom and pan.

In late October and early November 2003 the Sun provided one of the most active periods of solar activity since spacecraft have been in space. On the same hemisphere of the sun, there were three large active regions that produced more than 100 major solar flares, the largest recorded flare as seen in X-rays, very large interplanetary particle events, the most energetic coronal mass ejection on record, and geomagnetic storms. One of the active regions, region 486, can be proclaimed as the most powerful region during this solar cycle. Two of its solar flares saturated NOAA's soft X-ray detectors that are used to classify solar flares. The P.I. carefully reconstructed the soft X-ray light curves of these giant flares by matching curves of a similar but smaller flare from region 486. The largest flares saturated the 1-8A detectors at a level of ~X18.4 but the corrected data indicate fluxes 66% larger at X30.6 – easily making this the largest ever seen since X-ray observations began in the mid-1960's. This was indeed a most remarkable period of activity when plasma physics literally hits home! As noted by scientists from the TRACE satellite, one Japanese spacecraft was lost completely and more than 25 other research satellites had to be placed in safe hold conditions or suffered instrument losses. Astronauts on the International Space station were ordered into aft sections five times in order to receive more protection from proton storms. Power grid operators modified routing operations and reduced output of nuclear power plants in order to avoid damage from the numerous geomagnetic storms. Global positioning systems (GPS) had problems including one on a deep ocean drilling ship. It was fortunate that the great flare and CME pictured above occurred when it did and not five days earlier. Had that occurred, Earth would have taken the full blast of the CME and interplanetary particle storms – we would probably have had major problems with satellites, power grids and other major systems with unforeseen consequences.

A new algorithm by Stephan White presents updated expressions for determining temperatures and emission measures of flares from the x-ray data. Kiplinger has received these algorithms from White and currently plans to include these results in a paper. In addition, he has discovered that soft x-ray data exists from another satellite which may allow a more accurate, independent calibration of the largest solar flare ever recorded.