Is Civil Discourse Dead? A Conversation with Robert George and Cornel West 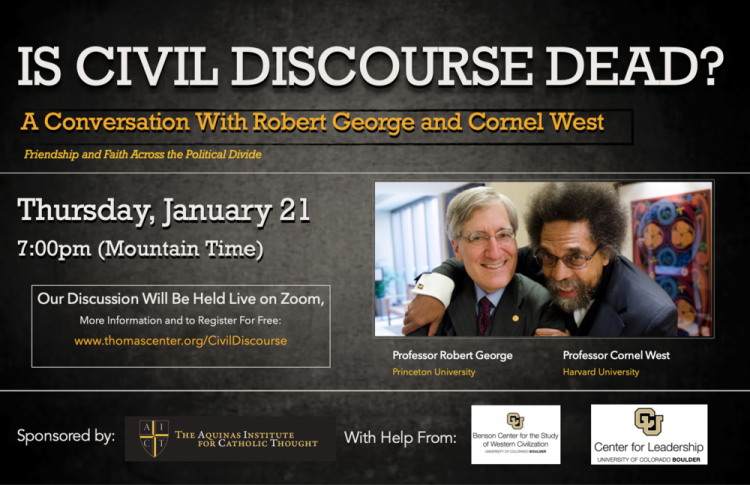 This event has concluded.

Professors Robert George of Princeton University and Cornel West of Harvard University will join Dr. Scott Powell, Director of the Aquinas Institute for Catholic Thought at CU Boulder for an honest conversation about friendship, faith, and the state of civil discourse across our nation’s political and cultural divides. George and West represent monumentally different points of view politically, culturally, and socially, yet, they have been a public example of thoughtfulness and of a close friendship which is unbound by partisan divides. They have co-taught courses together, written together, and have traveled the globe speaking together about the importance of liberal education and honest civil dialogue. Join us for this critically important and timely conversation online over Zoom. Registration is free. Sponsored by the Aquinas Institute for Catholic Thought, with help from the Benson Center for the Study of Western Civilization and the Center for Leadership.

Dr. Robert P. George is McCormick Professor of Jurisprudence and Director of the James Madison Program in American Ideals and Institutions at Princeton University. He has served as Chairman of the U.S. Commission on International Religious Freedom and as a member of the President’s Council on Bioethics and the U.S. Commission on Civil Rights. He also served as the U.S. member of UNESCO’s World Commission on the Ethics of Scientific Knowledge and Technology. His honors include the U.S. Presidential Citizens Medal, the Honorific Medal for the Defense of Human Rights of the Republic of Poland, and Princeton’s President’s Award for Distinguished Teaching.

Dr. Cornel West is a philosopher, author, activist, social critic, and one of America’s most vital public intellectuals. He has published more than 20 books, has appeared in over 25 documentaries and films and has produced three spoken word albums including Never Forget, collaborating with Prince, Jill Scott, Andre 3000, Talib Kweli, KRS-One and the late Gerald Levert. Dr. West is Professor of the Practice of Public Philosophy at Harvard University and holds the title of Professor Emeritus at Princeton University.