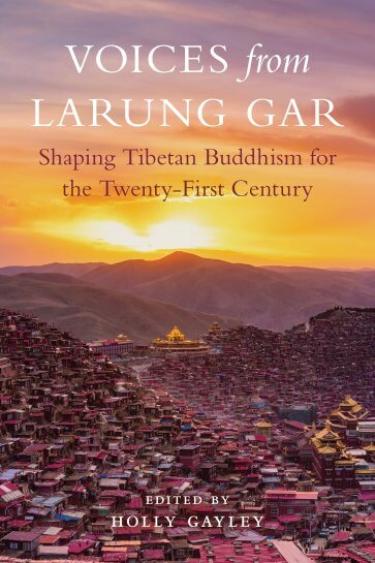 The 2.5 hour symposium features Anam Thubten and David Germano in dialogue about Larung Gar, one of the largest Buddhist institution on the Tibetan plateau. This will be followed by a panel of contributors to the ground-breaking anthology, Voices from Larung Gar, addressing innovative approaches by Larung Gar leaders with respect to Buddhist ethics, gender equity, animal welfare, and scientific discourse.

Voices from Larung Gar is the first collection of talks and writings by the leading voices of Larung Buddhist Academy, better known as Larung Gar. The book offers a compelling vision for Buddhism in the twenty-first century by some of the most erudite, creative, and influential Tibetan Buddhist luminaries today. In everyday language, these leaders delve into an array of contemporary issues, including science, ethics, gender equity, and animal welfare.

This collection features contributions from a range of prominent figures who are forging dynamic, modern paths forward for an ancient tradition. Included are the internationally renowned Khenpo Jigme Phuntsok, founder of Larung Gar, his distinguished successors Khenpos Sodargye and Tsultrim Lodro, and erudite nuns holding the scholarly title Khenmo, who are becoming known for their impressive publishing projects. Larung Gar is thus one of Tibetan Buddhism’s most vital communities, actively balancing cultural preservation and innovation.

This event is co-sponsored by the UVA Tibet Center and Tibet Himalaya Initiative at CU Boulder, under the auspices of our Center for Asian Studies.