Cyberspace, Music, and Participation in the Japanese Antinuclear Movement 2016.03.04 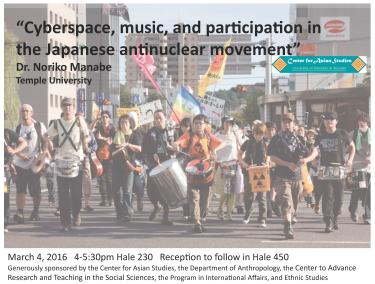 Noriko Manabe, Assistant Professor in Music at Temple University, will discuss music and the antinuclear movement in Japan.

In the weeks following the triple disaster of March 11, 2011, an atmosphere of “self-restraint” made residents feel unable to talk freely about radiation and nuclear power. The openness, mobile accessibility, and potential anonymity of the internet helped Japanese citizens to overcome the spiral of silence (Noelle-Neumann 1974, Ito 2013) and enabled them to disseminate information, discuss the issues, and mobilize (Slater et al 2012). Cyberspace became a depository for music that would otherwise be censored (e.g., Sait? Kazuyoshi’s “It Was Always a Lie”) or subjected to copyright payments, allowing creative expression by anonymous citizens. Using video, this music informs residents about antinuclear arguments and protest activities. Music in cyberspace facilitates political participation on- and off-line, and gives a second life to street protests which are reinterpreted in the cyberspace archive.

Sponsored by the Center for Asian Studies, the Department of Anthropology, CARTSS, Program in International Affairs, and Ethnic Studies.