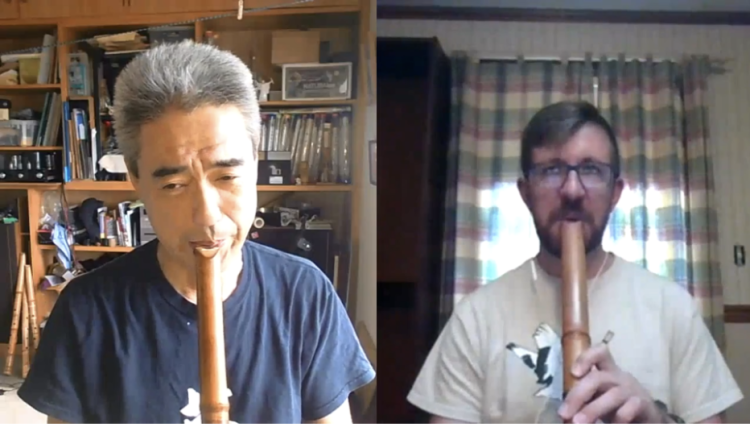 The Center for Asian Studies offers support for summer research or language study to graduate students working on Japan through the Edward G. Seidensticker Japan Summer Research Grant. Brandon Stover was a 2022 grant recipient and reports on his activities below. Applications for summer 2023 will be due on February 20, 2023.

I am studying how the Japanese shakuhachi flute is taught and disseminated online. I want to see what changes teachers have made in order to teach online (as opposed to in-person) as well as what such changes might be doing to the tradition. I also hope to look more specifically at how timbre and the idea of timbre is taught online.  Timbre is the different characteristics of sound that help us distinguish one sound from another. The shakuhachi is an instrument which makes broad use of different timbral sounds and colors, therefore, how these ideas are taught online is important for the future of the tradition.

I began the summer taking lessons with Shawn Head. Shawn is an American-born shakuhachi performer and teacher who currently lives in Japan. He has cultivated a community of shakuhachi players and enthusiasts on Discord and through my grant-funded lessons, I was introduced to this community. I was able to attend several virtual masterclasses as well as perform for the group (albeit only half of a piece because I had to watch my then seven month old).

I next took several lessons from Riley Lee, who is located in Australia. Riley has been teaching and performing for many years and is considered one of the best shakuhachi players outside of Japan. With Riley, I worked on a piece of music that I had learned from Shawn (Sanya - Mountain Valley) to see the differences in the way Riley taught online. My lessons were on Skype, so I was also able to see differences between the platforms. I was fortunate to be able to take an in-person lesson with Riley when he visited Colorado in June and learn a piece of music he composed for the shakuhachi (Fumai Inga - Without Ignoring Causation).

Lastly, I took lessons with Kaoru Kakizakai, located in Japan. With Kaoru, I also learned a piece I learned from Shawn (Honshirabe - First piece). I was able to learn Tamuke (Hands Folded Together), one of the most well-known shakuhachi pieces and I performed it for a church service in early July.

Thanks to the grant, I was able to take all these wonderful lessons and learn 7 different pieces of music. I also recorded each of my lessons and have been working to transcribe them. This data will be important in my research on the transmission of timbre. I found that different teachers use slightly different techniques. Often, the teachers resort to verbal or visual cues, holding their shakuhachi up close to the camera, in order to convey techniques used when trying to alter the timbre of the instrument.

Shawn relies heavily on pre-recorded YouTube videos to help his students learn a piece of music. After the student becomes proficient enough with the notes, he is able to guide them in making it musical (through adjustments to timbre and dynamics). Kaoru relies heavily on practicing Robuki, playing the lowest note on the instrument for long periods of time. Through this technique, students can develop their sound without having to work on playing right or wrong notes or even changing fingerings. Riley uses repetition and mindfulness to help guide students toward an acceptable timbre and musicality. He asks his students to play the part again, this time holding in mind a certain part of the performance (maybe it is holding steady pitch, or volume, etc.). My main teacher, Justin Williams, also uses mindfulness to guide students.

I plan to continue this research over the next few years as I write my PhD dissertation. I would like to say thank you again for the opportunity to study online timbre transmission and Shakuhachi.