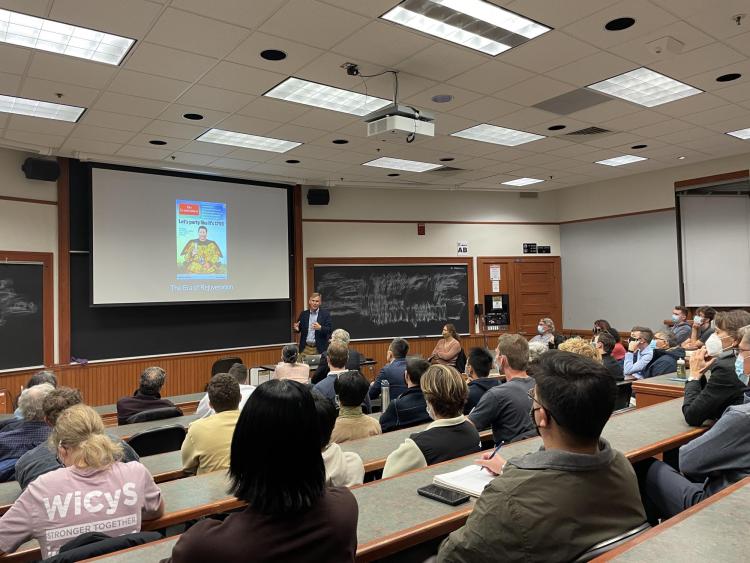 On November 8, the Center for Asian Studies hosted former diplomat Dave Rank at our first in-person public lecture since March 2020. We have missed the opportunity to gather and share ideas and information about Asia, so having over 70 CU students, staff, faculty members, and members of the broader community all together in one room was quite exhilarating.

Rank spent 27 years as a State Department Foreign Service Officer, including his final assignment as Deputy Chief of Mission and, following the 2016 election, as the Charge’ d’Affaires (acting Ambassador) at the U.S. Embassy in Beijing. His lecture, “U.S. – China Relations in the Era of Xi Jinping,” helped bring a long-term perspective to current challenges in the two countries’ relationship.

Rank discussed Chinese domestic behavior, including tightening control over communication, increased surveillance, and expansion of detention camps in the Xinjiang region, and suggested that despite Xi’s confidence that he is the leader China needs to assert its prominence on the world stage, the challenges associated with governing China are growing. Issues such as a slowing economy, aging population, looming real estate bubble, and increasing debt will require adjustments.

On the U.S. side, the Obama Administration attempted to draw China into existing international structures as much as possible while also advancing U.S. interests, encouraging China to align with internationally-accepted principles. The Trump Administration shifted to a more confrontational approach, decreasing U.S. engagement with China. One year into the Biden Administration, it seems that President Biden is somewhere in the middle, maintaining many Trump policies around China, but also reengaging with US allies and partners.

Rank was not optimistic that the U.S. – China relationship will improve much over the near term, and over the longer term, he anticipates that strategic competition rather than bilateral cooperation and engagement will be the dominant trend. However, he also suggested that we are living in a more multi-polar world than existed during the Cold War of the late 20th century, so he does not believe that we are moving toward a new world order that forces countries to separate into clear pro-U.S. or pro-China camps.

The recording of Rank’s full talk can be viewed here on the CAS website.