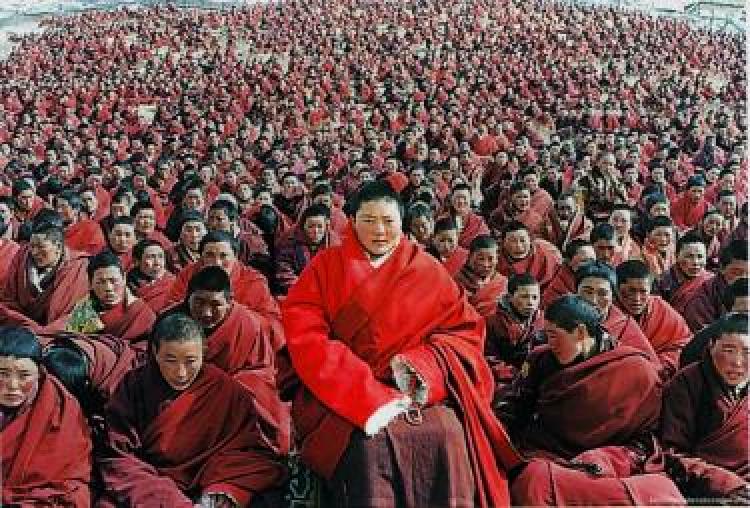 In 1997, the first cohort of women to receive the highest degree in Buddhist philosophical training graduated from the Larung Gar monastic institute in Eastern Tibet. After graduating as khenmos or scholar nuns, they began to assume institutional power (authority?) throughout Larung Gar, and have become teachers, publishers, and even philosophical commentators. Today, similar programs bestowing these khenmo degrees are slowly expanding throughout eastern Tibet to similar results. The Larung khenmo program was founded as part of a larger effort by the institute’s founder, Khenpo Jigme Phuntsok (1933-2004), to challenge the public perception of women as incapable of advanced learning. Jue Liang and Andrew Taylor Illuminate how this public demonstration that nuns are capable of the same rigorous scholarship and religious practices as monks has helped to legitimate nuns as fields of merit for donors who had traditionally supported monasteries at the expense of nunneries. The khenmo movement has changed and is changing both women’s self-understandings of their own practice and lay attitudes toward women’s religious capacities.

Join us on Tuesday, October 27 at 6pm MDT via Zoom for a dynamic conversation between Jue Liang and Andrew Taylor, based on their collaborative research and recent article, “Tilling the Fields of Merit: The Institutionalization of Feminine Enlightenment in Tibet’s First Khenmo Program” (Journal of Buddhist Ethics, 2020). Professor Padma ’tsho of Southwest University for Nationalities will offer a response, followed by time for questions.

Jue Liang is the ASIANetwork-Luce Foundation Postdoctoral Fellow in the Religion Department at Denison University. She is a scholar of women, gender, and sexuality in Buddhism, Buddhist hagiographies, and Treasure (gter ma) literature.

Andrew S. Taylor is a Ph.D. candidate in Religious Studies at the University of Virginia. Trained as a Tibetologist, his scholarship seeks to revive comparative religion as both a field and a method.

Padma 'tsho is Professor in the Tibetan Studies Depart­ment of Southwest University for Nationalities in Chengdu, China. Her areas of research and teach­ing include Tibetan Buddhism, ritual studies, gender issues, and the education of Buddhist nuns in Tibetan areas.