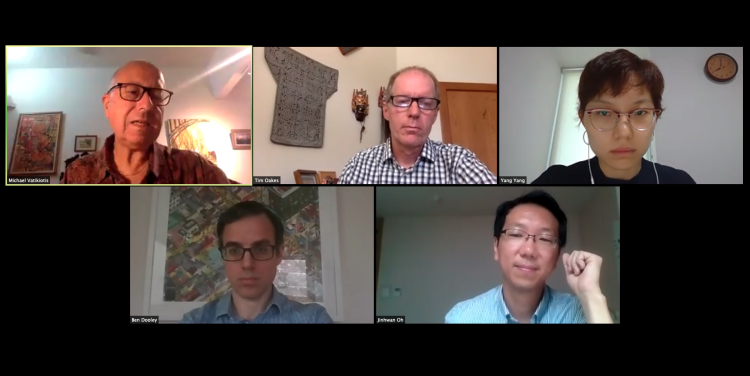 On June 18th CAS hosted a webinar on “Asia After COVID-19” which featured four Asia-based speakers offering their comments on the short and long term impacts of the COVID panedemic in different regions of East and Southeast Asia. What, we asked them to consider, are the “new normals” that people in different parts of Asia are anticipating and negotiating? Presenters included Michael Vatikiotis, Singapore based writer and journalist and current head  of the Centre for Humanitarian Dialogue; Yang Yang, postdoctoral fellow at the National University of Singapore’s Asia Research Institute; New York Times journalist Ben Dooley, who reports from Tokyo on Japan’s business and economy; and CAS visiting scholar Jinhwan Oh, Associate Professor of International Studies at Ewha Woman’s University in Seoul.

Vatikiotis discussed the impacts of the pandemic on democracy movements and on on-going conflicts throughout the Southeast Asian region. He called attention to the ways some states were using emergency measures to fight the spread of COVID-19 to dampen incipient democracy movements and trends, noting, for example, how in many countries these measures have been enacted by the military, and how concern over popular protests has led to a significant curtailing of civic activity in some places. Looking ahead, however, Vatikiotis noted that the poor performance of many governments in handling the pandemic may provide openings for a more robust opposition politics in those countries.

Yang focused her comments on Singapore’s dependence on migrant workers and how the they have disproportionately suffered the consequences of the disease outbreaks there, particularly due to the crowded and confined conditions in which they live. Yang argued that the pandemic has forced a reckoning in Singapore with its dependence on, and poor treatment of, foreign workers and that longer term attention to physical distancing will likely force the country to reduce the numbers of migrant laborers it recruits.

Dooley discussed the relatively success that Japan has had in combating COVID-19 and how there are no obvious explanations for this success; but he also noted that the narrative of Japan as a success story is exaggerated when one looks at the actual record and when considering some of the failures of the government’s response. Dooley suggested that hosting a 2020 Olympics in 2021 seems very unlikely.

Finally, Oh discussed how the effectiveness (and invasiveness) of tracking and tracing apps in South Korea brought up concern for privacy rights vs. the public’s right to know, and how South Korean society collectively weighed the latter much more heavily than the former, partly due to previous experiences with SARS and MERS. He also noted the way the pandemic was altering people’s thinking about education and health care, with an increased willingness to engage remotely with these sectors than before.

The event was attended by nearly 80 people from around the country and the globe. There were many questions dealing with issues of long term investment and economic growth, international education, borders and decreasing mobility, politics, and many others. A recording of the panel can be found here.