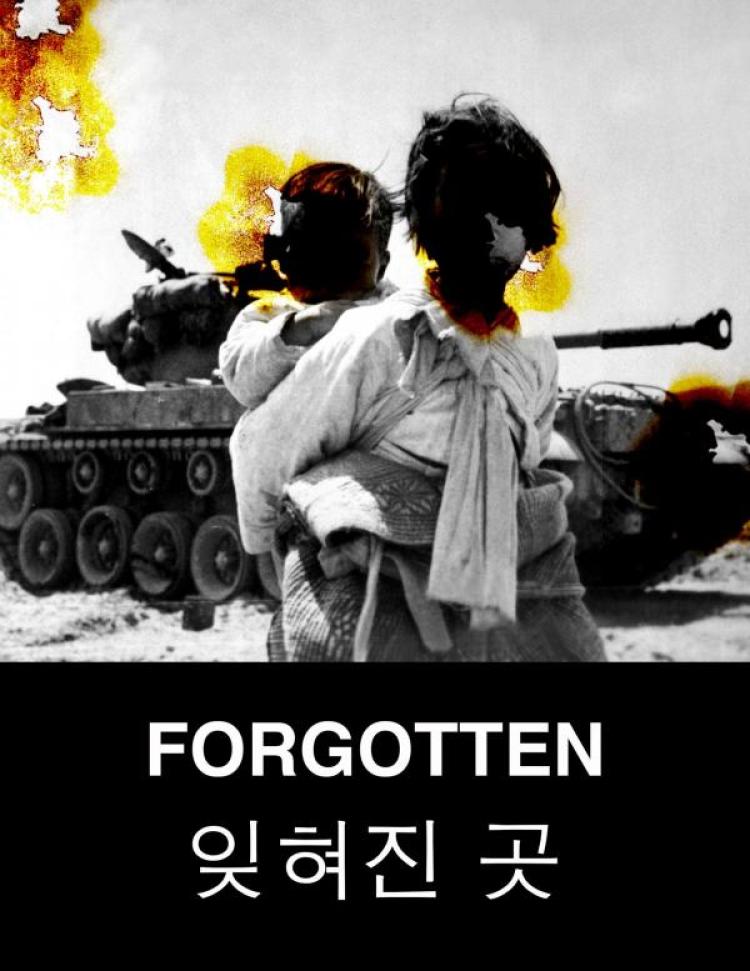 As he’s done so many times before, George Rivera will pack up 117 pieces of art into a suitcase and board a plane heading to a place where rifles can seem more common than paintbrushes.

This time, his boarding pass will take him to South Korea to put on an art exhibit roughly three miles south of the North Korean border, just outside the demilitarized zone (DMZ). The CU Boulder Art & Art History professor will stow the art in an airplane overhead compartment for more than a dozen hours and ride across the Korean countryside, finally destined for South Korea’s DMZ Museum.

Running from June 22 to Dec. 22, the exhibit will include 23 pieces from current CU Boulder students, specifically created to reflect the tensions of the DMZ and history of border conflict on the Korean peninsula.

The artists in the show were instructed to make diptychs—compositions created on two separate panels—no larger than a sheet of printer paper so they can all fit in Rivera’s suitcase. Each piece addresses the theme of liminal space, or the state of being on both sides of a physical boundary like the five-mile-wide, landmine-ridden DMZ.

One piece, All-Healing, by CU Boulder alumna Claire Jackel, explores the divide through mirrored drawings of the ginseng plant, which is commonly grown on both sides of the border.

“The plant has been used for centuries to improve clarity, promote relaxation, and heal many other ailments” she captioned her work. “I have drawn the roots reaching for one another in recognition of each side’s common roots and in hope for ‘all-healing’ peace.”

The Korean trip is just Rivera’s latest in an extended stint of globe-hopping as ambassador for his art collective, Artnauts.

He formed the group—a portmanteau of “art” and “astronauts”—in 1996 as a way to take art to places of contention internationally and address social issues of our time. He has now put on more than 300 art exhibitions in more than a dozen conflict-affected countries around the world.

While Artnauts art provides commentary on regional conflicts, the exhibitions are not intended to push outside solutions for local issues.

The mission, said Rivera, “is to connect to a common link, to human problems we all face.”

Before joining CU Boulder’s Art & Art History department, Rivera spent 20 years as a sociology professor. He believes that experience brought a heightened social consciousness to his teaching and work to bring art to communities impacted by conflict.

“They are human beings. They get caught up in the webs of conflict and history, but they’re just like you and me,” he said.

Rachael Choi, a rising senior in the Leeds School of Business, is one of the students whose art will be displayed at the DMZ Museum through the end of the year. She originally signed up for Rivera’s course in search of a creative outlet.

“My mother was an art teacher, so art has always been dear to me,” said Choi. “As a business student, I struggled to find time for creative expression, leading me to pick up photography.”

As a Korean-American, Choi was especially interested in the exhibition and passionate about her contribution: DMZ is Forgotten.

“With the current administration in the United States, as well as the political climate between North and South Korea lately, I've personally been thinking about the future in unification. It's a heavy topic,” she said. “It breaks my heart to think about how some parts of South Korea do not believe North Korea belongs with them as one nation when there are families who have been split for decades, hardly being able to see each other.”

From Russia to Chile, Bosnia to the Palestinian territories, after more than 20 years of bringing art to conflict areas, Rivera has traveled the world with the Artnauts. As he found out firsthand, it’s not easy toting an industrial-sized load of art up one of the most famous rivers in the world.

After a 2012 exhibition at Universidad de los Llanos in Colombia, the country’s minister of culture offered the Artnauts a grant to work with local artists on a traveling exhibition to 30 venues throughout the Colombian Amazon.

Rivera, a strong believer in the power of art as a medium to connect people around the world, jumped at the chance to navigate undeveloped terrain, to transport his exhibits to tribal groups that had never seen contemporary Western art.

“I think as artists, we should make art that matters,” Rivera said.

When he found out landing strips in the middle of the rainforest wouldn’t be an option, he loaded the exhibit onto a cargo plane and landed on the Amazon River.

When roads weren’t accessible, he used barges to transport trucks carrying the entire exhibit down the river.

When exhibition spaces weren’t available in some tribal centers, he displayed the art on the inside of the trucks.

Sometimes, his mission is less smooth.

“You can see them coming at you,” Rivera recalled about three close calls with bullets in the West Bank.

One of those times, he was photographing art along the Israeli West Bank barrier during an Artnauts trip to Bethlehem.

As the rounds whizzed by, Rivera said he froze, helpless to move until it would have been too late.

He emerged from the gunfire unscathed, invigorated in retelling the story and unfazed by the prospect of doing it all again.

When the Artnauts decide to show an exhibit, Rivera said, “You don’t know what’s going to happen, but we’re going.”

“We’ve got to bring humanity to the inhumanity they’re facing around them,” said Rivera. “They need it the most."