In 2017 CAS offered 35 public events which included 14 Lunch Series lectures, and 21 public lectures, panel discussions and performances. We engaged 828 audience members with a wide variety of Asia-related topics. In the Spring of 2017, CAS held several events all centered around the annual theme “Asian Borderlands.”

This event examined the historic and current ramifications of the “borders within boarders”  incarceration of Japanese-Americans during World War II. The panel included Tom Ikeda, the founding Executive Director of Densho, a grassroots organization dedicated to preserving, educating and sharing the story of the World War II-era incarceration through oral-history interviews, CU faculty Patty Limerick (Director, Center for the American West) and Marcia Yonemoto (Associate Professor, History). This event was co-hosted by the Center for the American West, History, and Ethnic Studies. 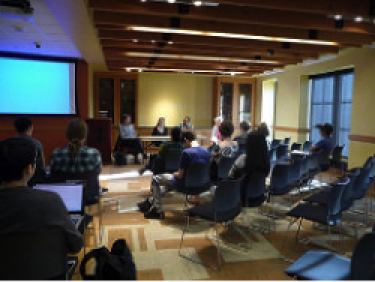 Catherine Allerton, a lecturer at the London School of Economics, discussed migrant illegality and non-citizenship in Malaysia, and how the children of these migrants are subject to the politics of race and the idea of “deservedness.” She was joined by Imam Abdul Malik Mujahid, an award winning author, and producer who focuses on contemporary social issues, public policy and Islam-West relations. The discussion was moderated by CU faculty Carole McGranahan (Anthropology).

Leif Jonsson’s research into the historical state-decreed difference between Chinese and Yao people. In Emperor Ping’s Charter, intermarriage between the two groups was forbidden, but the punishment fell into a group of hilarious things, including giving authorities a jar of mosquito relish. This discussion of state acceptance and civil pluralism of ethnic groups also included a panel of CU faculty.

4/24/17 Banning Muslim Travel: Why It Matters with Professors Aun Ali (Religious Studies), Nabil Echchaibi (Media, Communication and Information), Rachel Rinaldo (Sociology), and John Willis (History) In response to the Trump Administrations’ Muslim Ban, CAS held a panel discussion that gave perspective on historical precedents, and how the concepts of citizenship, boarders and religion inform immigration and naturalization. The panel examined how threats can be obstructed concentrated by concepts and associations about people who have specific regional and religious affiliations. This was produced in association with the Center to Advance Research and Teaching in the Social Sciences.

Mr. Hata provided a lecture and demonstration on the traditional Japanese Art of scent. His lecture examined Japanese aesthetics and historical use of incense in Japan, and then the Shoyeido team brought different scents prepared specifically for this demonstration in a traditional way to the audience of about 80 people. The audience was shown how scent was traditionally experienced and valued. All the audience members were given a small scented piece of wood at the conclusion of the evening. 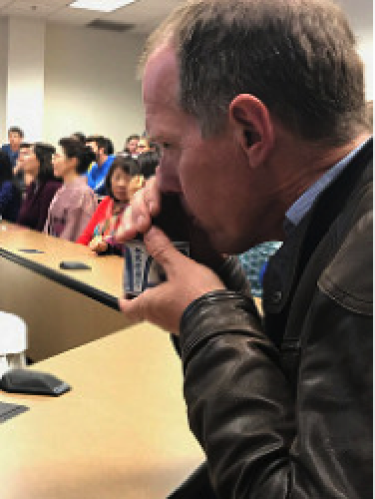 10/25/17 The Phoenix Years: Art, Resistance and the Making of Modern China

Journalist and foreign correspondent Madeleine O'Dea has been an eyewitness for over 30 years to the rise of China and the explosion of its contemporary art and cultural scene.

Her lecture, based on her book The Phoenix Years, told the story of the country's emerging artistic avant-garde and the Chinese people's ongoing struggle for freedom of expression. 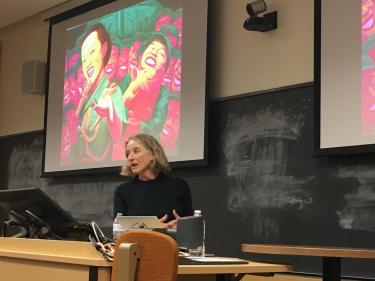 This event was a panel discussion with Jerry Peterson, Professor Emeritus of Physics; Hun Shik Kim, Associate Professor of Journalism, College of Media, Communication and Information; and Brian Toon, Professor, Department of Atmospheric and Oceanic Sciences. a discussion of the scientific and media perspectives on what we know about North Korea’s nuclear program and how it is portrayed and perceived around the world, and especially in the US. Prof. Peterson who took the audience through North Korea’s acquisition and enrichment of nuclear materials, where they come from, and the evidence that NK has been prioritizing their nuclear program over developing infrastructure, especially an electrical grid across the country. Prof. Toon brought the audience through an understanding of the scope and size of the nuclear bombs now in development in North Korea and how nuclear clouds could spread and the potential catastrophic effects of a war on the Korean Peninsula. Prof. Kim began his presentation by pointing out that very little beyond catastrophic loss of life, threats to the US, or the involvement of military deaths are reported in the US, and that gives most Americans a very myopic view of world events. By engaging Donald Trump in ways that illicit reactions out of proportion to the actual degree of importance on the world stage, Kim Jong-un creates a degree of perceived importance that he craves. Discussion afterward focused on how and what we can actually know vs. what we believe about the situation. Overall, this was a timely and pertinent event in light of the present relationship between the US and North Korea. 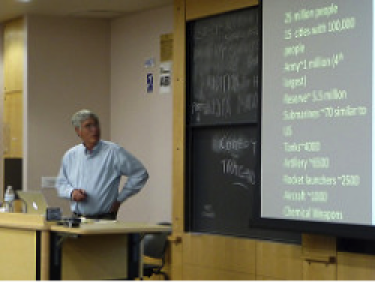 Video of many of the above events is available on the CAS website at www.colorado.edu/cas/event-videos.