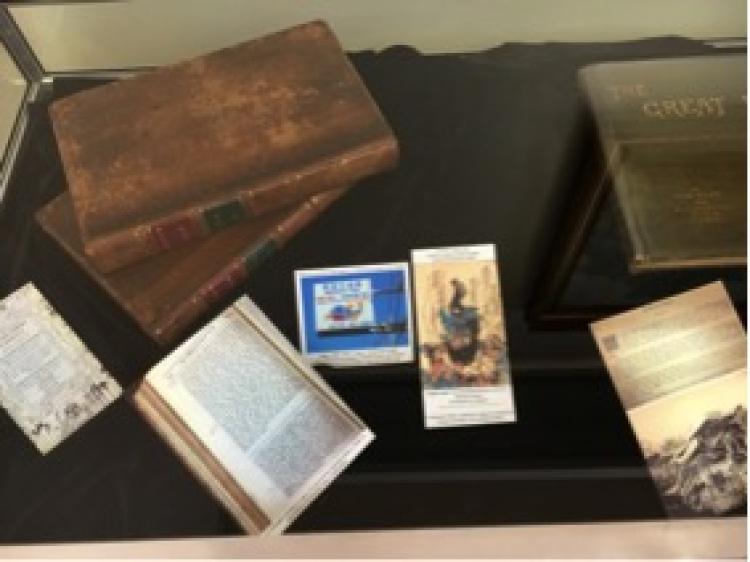 Adam Lisbon, Japanese Studies Librarian, curated Japan and Disaster:  1670-1995, a small exhibition of items relating to major natural disasters in Japan over the past 325 years.  Japan is prone to frequent earthquakes because the island nation sits atop four tectonic plates.  They had no less than seven earthquakes above 8.0 on the Richter scale between 1703 and 1968.  In addition, there was the Great Kanto Earthquake of 1923, which was only a 7.9, but one of the deadliest disasters on record, claiming over 142,800 lives (more statistics).  These quakes, and the tsunamis that can follow, are a tragic part of Japan’s past.  However, this adversity only highlights the strength and resilience of the Japanese people.

Two works of special interest are Atlas Japonensis (1670) and Kaempfer’s History of Japan (1727). Europeans authored both of these works during the time of sakoku, literally “closed country,” or national isolation, from roughly 1640-1854, and they offer a rare view of the island nation at that time.  The former is a compilation of entries from other voyagers edited by the Dutchman Albert Montanus who never actually went to Japan.  The latter is an important two-volume set composed during the two years that Englebert Kaempfer, a German physician working for the Dutch, lived in Nagasaki—the one island where foreigners were permitted to do trade.  There are also modern works and first-hand accounts from the time of the Great Hanshin Earthquake, which heavily damaged the city of Kobe in 1995.

When you visit Norlin, you will also find about 30 books on special display for visitors interested in learning more about the nation that has been in exile since 1959.  This is in honor of His Holiness the Dalai Lama’s visit to CU-Boulder on June 23, 2016. Topics range from history and geography to religion and biographies of the Dalai Lama himself. You can still see Japan and Disaster:  1670-1995 through July 8, 2016 and Tibet, Buddhism and the Dalai Lama through July 1, 2016!  Both displays are currently on display at Norlin Library.