Join Us Tonight for "Children Divided" 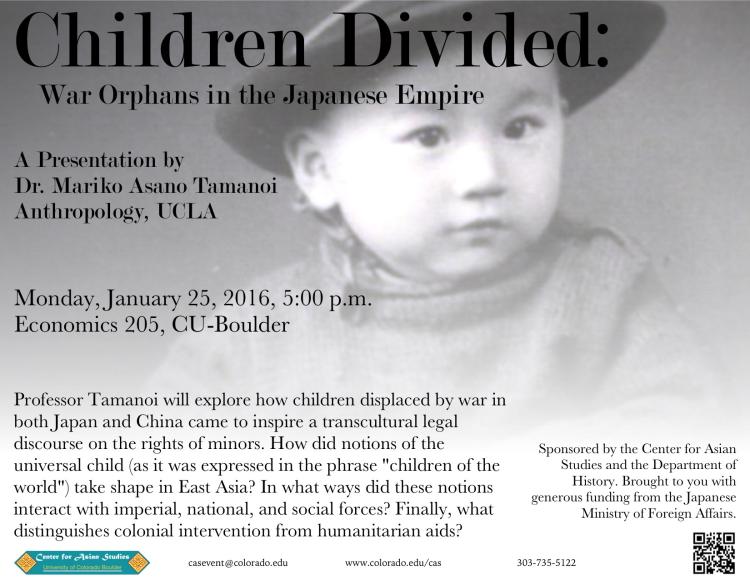 Join the Center for Asian Studies for the second event in our "Transcultural Japan" series, to be held tonight, January 25. Dr. Mariko Asano Tamanoi will discuss "Children Divided: War Orphans in the Japanese Empire." This event is brought to CU with generous funding from the Japanese Ministry of Foreign Affairs.

Professor Mariko Asano Tamanoi, Department of Anthropology, University of California Los Angeles will explore how children displaced by war in both Japan and China came to inspire a transcultural legal discourse on the rights of minors. In the aftermath of World War II, children, especially orphans, were at once divided, protected, and oppressed by different political forces--the Japanese state, the Nationalists and the Communists in China, and the U.S. Occupation Forces. The messy realities surrounding both Japanese and Chinese children were in part created by the idea of the "rights of the child" but also by other novel constructions of the time: "the nation's children," "the empire's children," and "social work" (shakai jigyō). These ideas coexisted with both older visions of "philanthropy" and a new concept of humanitarian aid. How did notions of the universal child (as it was expressed in the phrase "children of the world") take shape in East Asia? In what ways did these notions interact with imperial, national, and social forces? Finally, what distinguishes colonial intervention from humanitarian aids? Sponsored by the Center for Asian Studies and the Department of History.