A group of Beginning Japanese students won 1st place in the category of skit presentations at the 29th Colorado/Wyoming Japanese Speech Contest held at the Colorado Convention Center on November 7th, 2015. Twelve schools and 160 people attended the event. 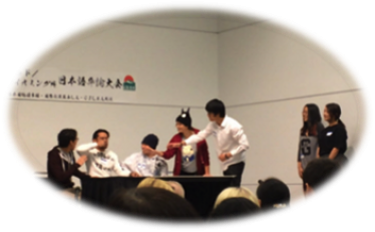 Their skit, titled おかしい！(Strange!), comically depicted the frustration of a native Japanese student who took a group of international students from the U.S. around a city in Japan, eventually arriving at a teppanyaki restaurant. There, the international students made a series of food-related mistakes and one of them ended up eating a big mouthful of wasabi! Everyone in the audience was entertained by their performance.

The seven students from different sections in JPNS1010 volunteered to participate in the skit contest and they prepared and practiced their skit outside class hours. As their instructor, it was amazing to see what they were able to create with basic grammar that they had learned in class during the first two months of their Japanese language study. I’m proud of their teamwork and courage to go on the stage to showcase their language skills. Best of all, everyone told me they enjoyed their experience. I also enjoyed all the skit and speech presentations and I was inspired by the dedication of Japanese language students throughout Colorado and Wyoming.