Home News & Events News In the Spotlight CAS Hosted Japanese Delegation for the "Walk in U.S., Talk on Japan" Tour from the Prime Minister's Office!

CAS Hosted Japanese Delegation for the "Walk in U.S., Talk on Japan" Tour from the Prime Minister's Office! 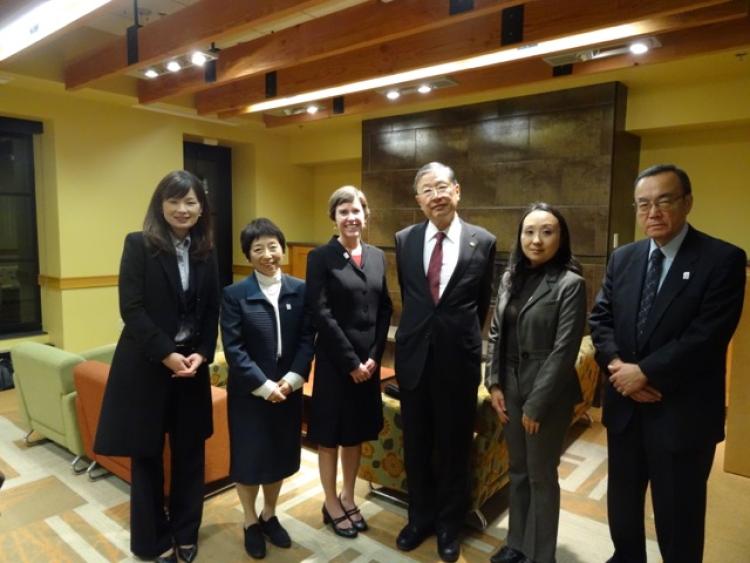 On Monday, November 9, 2015, the Center for Asian Studies was pleased to host the "Walk in U.S., Talk on Japan" delegation from the Japanese Prime Minister's Office. The delegation featured Ken Shimanouchi, former Japanese ambassador to Spain and Brazil, as well as four other Japanese citizens who spoke on nature in Japan, diversity in the Japanese economy, women in Japanese society, and the importance of traveling to meet people of other cultures. The visit was featured in the Colorado Arts and Sciences Magazine. For the full article, please click here.

"On Monday, five delegates from the Prime Minister of Japan’s Cabinet Office spoke to students, staff, faculty, administrators and community members at the university’s Center for Community. Their appearance was part of a nationwide good-will tour called 'Walk in U.S., Talk on Japan.'

The group’s intention is to help U.S. citizens gain more appreciation for political, economic and cultural issues in Japan, and to encourage more trans-Pacific amity.

Norimichi Hayashi, who is retired from Itochu Corporation, argued for personal exchange among nations. He fondly described his 50-plus-year relationship with his U.S. homestay family that he met at the age of 18.

Younger generations are key to further strengthening Japan-U.S. relations, he said. Under Prime Minister Abe, study-abroad scholarships for Japanese students have doubled. More than 60,000 Japanese students are studying abroad this year, he said.

Michiko Iwanami, an analyst for Sojitz Research Institute, conducts research for business development, which gives her an opportunity to examine cultures of other countries.

As of 2014, Japan still had one of the largest gender gaps in the world, with a ranking of 104 out of 142 countries, while the U.S. is ranked 20th. She noticed on her business trips abroad that other countries had more women in high-level positions, and she hopes the 'Womenomics' will help change this pattern.

The 'Walk in U.S.' event, he said, was one among many efforts to correct that incongruity."

Thank you to the "Walk in U.S., Talk on Japan" delegation for coming to CU and giving the audience such a wonderful presentation and opportunity for one-on-one discussions over dinner!