Home News & Events News In the Spotlight Join Us for A Jaipur Sampler on September 17!

Join Us for A Jaipur Sampler on September 17! 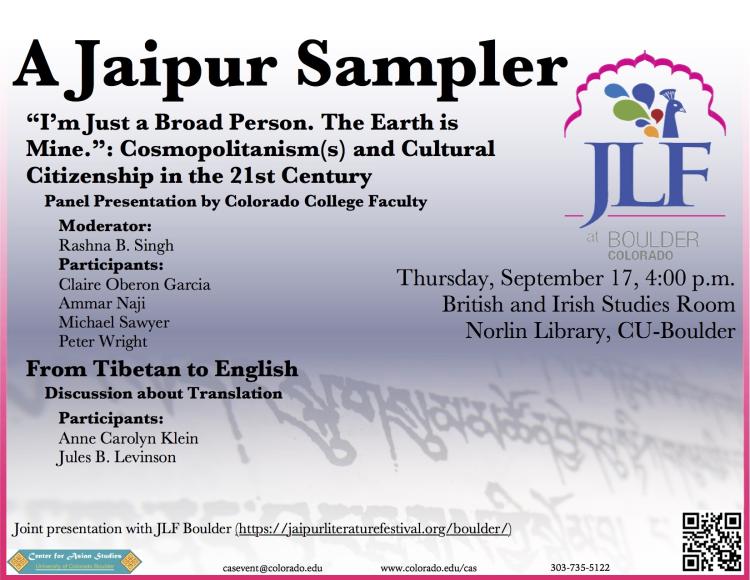 The Center for Asian Studies is a proud sponsor of the 2015 Jaipur Literary Festival Boulder, which will be held September 19-20. In preparation for the Jaipur Literature Festival, we are presenting an afternoon of related programming including a panel presentation and a translation discussion on the afternoon of Thursday, September 17. Both parts of the event will be held in the British and Irish Studies Room on the 5th Floor of the Norlin Library.

4:00 p.m. "I'm Just a Broad Person. The Earth is mine.": Cosmopolitanism(s) and Cultural Citizenship in the 21st Century

A young reggae fan declares "There's no such thing as England anymore" about the ethnically mixed neighborhood of Balsall Heath in Birmingham, U.K. "This is the Caribbean!...Nigeria!...There is no England, man. This is what is coming....I'm just a broad person. The Earth is mine." Scholars, especially postcolonial scholars such as Anthony Appiah, Ngugi wa Thiong'o, Arjun Appadurai and others engage with the issue of cosmopolitanism and its entwining of universal concern with legitimate difference. The challenge of cosmopolitanism is the clash therein. "Thoroughgoing ignorance about the ways of others is largely a privilege of the powerful," observes Appiah. In preparation for the Jaipur Literature Festival, this panel of Colorado College professors drawn from different disciplines and backgrounds will discuss how we define cultural citizenship, especially in the United States, and the challenges of a cosmopolitan society.

In the second part of the afternoon, Anne Carolyn Klein and Jules B. Levinson will engage in conversation about the translation of Buddhist literature from Tibetan as a step toward the creation of Buddhist literature in English, with all that this entails for the expression of the inexpressible, the kinesthetic embodiment of the imagination in the words of poems and songs, and the conundrum inherent in any attempt to convey transformative, liberative meaning without abetting fixation.