This Friday is the 4th annual CAS symposium. In this day-long conference, we will continue to examine our year-long theme, "Mediating Asia."

In addition to our keynote addresses, this year's conference will also feature three panels on "Media and Environmental Politics in Asia," "Authoritarian States, Nationalism, and the Unruly Media," and Identity, Culture, and Branding."

Isabel Hilton and Tom Yulsman will present on the "Media and Environmental Politics in Asia" panel, beginning after lunch at 1:00. Isabel Hilton is the CEO and Editor of chinadialogue.net, an independent, non-profit organization based in London and Beijing. As a journalist working for multiple news agencies, Hilton has reported from China, Latin America, Africa, the Middle East, and Europe. Joining Hilton will be Tom Yulsman, Associate Professor in the College of Media, Communication and Information, where he co-directs the Center for Environmental Journalism.

Then at 1:45, Michael Curtin, Timothy Weston, and Rianne Subijanto will present the panel on "Authoritarian States, Nationalism, and the Unruly Media." Michael Curtin is a Professor of Film and Media Studies at the University of California Santa Barbara. His research interests include globalization, cultural geography, media history, new media, and documentary. The second presenter, Timothy Weston, is an Associate Professor of History and the Associate Director of the Center for Asian Studies at the University of Colorado Boulder. His current research focuses on journalists and journalism in modern China. Joining Curtin and Weston will be Rianne Subijanto, Ph.D. student in Communication in the College of Media, Communication and Information at the University of Colorado Boulder. Her research examines the birth and growth of the communist movement in the late colonial period of the Dutch East Indies from the perspective of communication studies.

Beginning at 3:00, the third panel, "Identity, Culture, and Branding," will be presented by Mark Bender, Hiromu Nagahara, and Hun Shik Kim. Mark Bender is an Associate Professor of East Asian Studies and a Core Faculty member of the Center for Folklore Studies at Ohio State University. He specializes in traditional performance and performance-connected literature of China, including local Han and ethnic minority culture. Hiromu Nagahara is an Assistant Professor of History and the Cecil and Ida Green Career Development Professor at the Massachusetts Institute of Technology. He studies the history of modern Japan, and his research interests include the history of media and popular culture in the twentieth century. An Associate Professor of Journalism in the College of Media, Communication and Information at the University of Colorado Boulder, Hun Shik Kim will be the third presenter on this panel. His research interests include broadcast journalism, telecommunication systems and policies, international communication, and war and conflict reporting.

The "Mediating Asia" Symposium will be held in the British and Irish Studies Room on the Fifth Floor of Norlin LIbrary, and welcoming remarks will begin at 10:00 a.m.

Sponsored by the Center for Asian Studies; the Graduate Committee on the Arts and Humanities; the College of Media, Communication and Information; the Center for Environmental Journalism; and the Center for Media, Religion, and Culture. 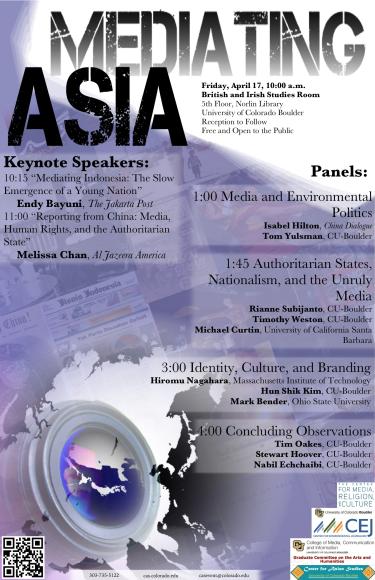