Loriliai Biernacki to Discuss a Medieval Indian Philosophy of Wonder

This Thursday, February 26, Loriliai Biernacki, Associate Professor in Religious Studies, will bring the second CAS Luncheon Series talk this semester on her research on the idea of wonder in medieval Indian Tantra, in a presentation entitled "Immaterial Bodies: Images of the Body in Medieval India."

For the West, the notion of wonder early in the tradition bifurcates into two somewhat divergent conceptions. For Socrates and Plato wonder is the beginning of philosophy, and beckons to an openness, an indeterminacy that stops the constrictions of speech.

For Aristotle, on the other hand, wonder prompts us to search for cause and effect. It is a goad, a curiosity that leads to its own erasure as the spellbound silence of wonder is replaced by knowledge. For Aristotle ignorance provokes wonder, yet wonder is not appropriate for mature philosophers.

The medieval Indian philosopher Abhinavagupta, writing in the early 11th century, however, tracks the notion of wonder in a different fashion, linking wonder, camatkāra, with the capacity for a vital self reflexivity. In this presentation, Biernacki will examine the implications of Abhinavagupta's conception of wonder.

The luncheon talk will begin at 12:00 p.m. and will be held in the CAS Conference Room, located at 1424 Broadway on the CU-Boulder campus (two doors north of Starbucks on University and Broadway). 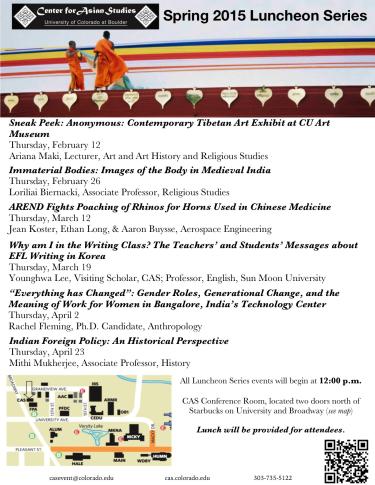