The CU community is pleased to welcome American-Syrian composer and pianist Malek Jandali to campus on Monday, September 29. Jandali, whose visit to CU includes both a lecture and an evening concert, uses his art to highligh the atrocities in the ongoing Syrian conflict, invoke the principles of human rights, and advocate for international aid.

Mr. Jandali’s presentation will be two-part. First he will give a one-hour lecture as part of the musicology and music theory colloquium series that will center on the current conflict situation in Syria and how he makes compositional choices in response to the conflict. Second he will give a 75 minute performance and discussion-based concert on his newest compositions for piano, cello and clarinet as well as his seminal work “Echoes from Ugarit,” which is his interpretation of a Hurrian clay musical script (dated 1400 to 2000 B.C. discovered in Ugarit, Syria 1950), known to be the oldest music notation in the world.

Recognized as a leading figure in today's piano world, Malek Jandali’s musical career as a concert pianist began in 1988 after winning the National Young Artists' competition followed by the 1997 "Outstanding Musical Performer Award" in the United States. As a prolific composer, his works have been performed with several leading orchestras around the world such as the Royal Philharmonic Orchestra, the Moscow Symphony, the Cairo Symphony, and the Ludwig Symphony Orchestra. He has also been a frequent guest on National Public Radio (NPR), Radio France Musique, and has featured on CNN, BBC, and PBS etc.

Malek Jandali has been successful in disseminating his message of peace and human rights using the medium of the recording industry. In effect he has received several awards including the 2011 "Freedom of Expression" award in Los Angeles for his song "Watani Ana - I am my Homeland", as well as his activism in the Arab Spring movement; the Arab-American Cultural Achievement Award in New York City; and the 2013 GUSI Peace Prize for his dedication to peace and humanitarian causes.

The event is hosted by the musicology department in collaboration with other units from within and outside of the university, including the department of anthropology, the department of arts and art history, and the United Nations Association, Boulder County. It is sponsored by the College of Music, the Graduate Committee on the Arts and Humanities, the Center for Asian Studies, and the Office of International Education. 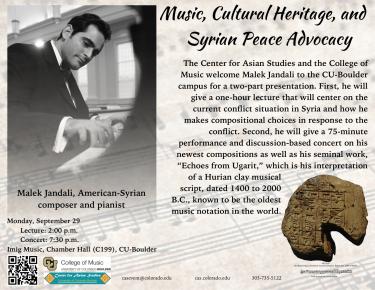