Anna Shields, Associate Professor of Chinese at the University of Maryland, Baltimore County, is coming to CU this week to give a talk entitled "The Body of the Friend: Friendship and Literary Culture in Mid-Tang China." This talk will be on Thursday, April 24 at 5:00 p.m. in Humanities 180 on the CU-Boulder campus.

Although long valued as the fifth of the five normative social relations in Confucian discourse, friendship in traditional China has only recently begun to be studied for its broader cultural significance in Chinese history. In her talk, Shields explores the impact of elite male friendship on the literary culture of the mid-Tang period (780s–820s), an era of great social and cultural change and the beginning of the epochal Tang-Song transition. Friendships with fellow literati provided mid-Tang men with social capital, intellectual stimulation, and sites for literary exchange. More profoundly, some of the most influential mid-Tang writers—men such as Han Yu, Bai Juyi, and Yuan Zhen—also saw friendship as bridging the public and private spheres: choosing friends and celebrating them in writing became an important way for literati to publicize their intellectual commitments and even their moral values.

Drawing from her book “One Who Knows Me”: Friendship and Literary Culture in Mid- Tang China (Harvard Asia Center, 2015), Shields focuses on images of the “body” of the friend in mid-Tang poems, letters, and funerary texts, in particular examining the use of metonymy in representations of absent friends. By invoking friends metonymically—through boxes of letters, gifts of poems, the remembered sound of a voice—mid- Tang writers were able to capture the intimacy and emotional weight of their friendships without conventional sentimentality. Through this and other innovative approaches to portraying friendship, mid-Tang writers forever broadened the scope of experiences appropriate to literary writing and brought private life into greater public view. 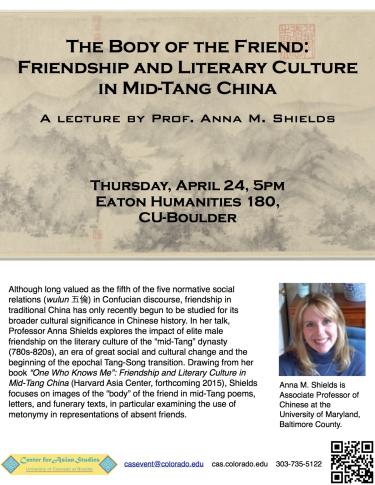