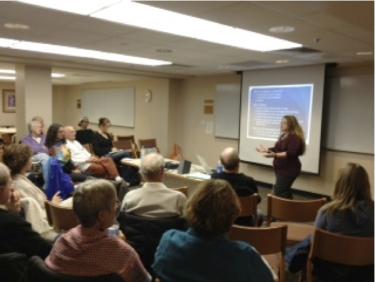 On November 9, 2012, CAS sponsored a lecture about conflict over water resources and their control and allocation amongst Israel and Palestine and their neighbors by Barbara Petzen, director of Middle East Connections and the former education director at the Middle East Policy Council. The talk was part of the Middle Eastern Culture Workshop 2012 series entitled, “Israel-Palestine: Two People, One Land ,” organized by the South, Southeast and West Asia Outreach Program (SSEWA). It examined political, humanitarian, and environmental aspects of the conflict, with special attention to the Jordan River valley and the Dead Sea, the status of the region's aquifers, and the rise of large-scale, export-oriented agriculture.

Overall about 50 participants attended the talk and a workshop following the talk on November 10. One of the CU faculty members in the audience wrote this about Barbara’s presentation, “She was clearly incredibly knowledgeable about the subject matter and I especially appreciated her distinctions between government and the role of civil society in how these issues are being addressed in Israel and Palestine. If you could please forward my gratitude to her or provide her email, I would appreciate the chance to tell her how much I gained from her lecture.”  According to Barbara, the Israeli-Palestinian conflict is often presented in very binary terms, with two opposing sides. However, when we listen to voices on the ground, the situation is much more complex. In this talk, Barbara explored a variety of perspectives from Israelis and from Palestinians to see how water has become such a volatile element in the conflict, and a possible catalyst for peacemaking.

To learn more about the South, Southeast and West Asia Outreach Program (SSEWA), visit their website at http://www.colorado.edu/cas/south-southeast-and-west-asia-outreach-program-ssewa.