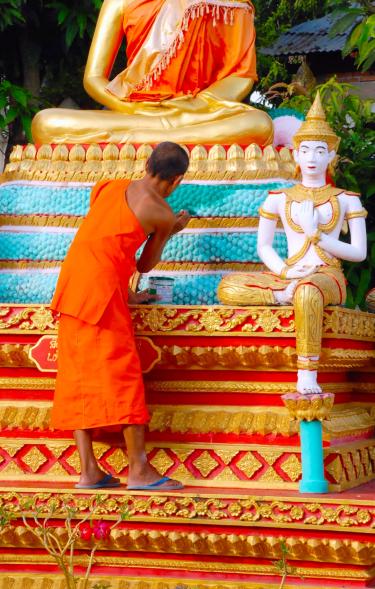 University of Colorado Boulder graduates go on to do great things. Former Buff Gwendoline Van Doosselaere recently took off to travel the world - beginning her adventures in Asia. She shares some of her experiences below:

Tonight, I am about to board a long haul flight between Hong Kong and Johannesburg while the US decides the fate of the 45th President; I've just spent almost three months surveying the East, passing through Japan, China, India, Nepal, Cambodia, Laos, and Thailand. I am, admittedly, nostalgic as I say farewell to a lifetime's worth of memories racked up on this Asian continent: seeing Tokyo's urban sprawl from atop the world's tallest tower, experiencing a real Japanese onsen, participating in the early morning Tai Chi and dance classes at the Temple of Heaven, giving an offering to the Mother Ganges, eating a home cooked curry, taking a camel safari in the Indian desert, hiking the Himalayas, biking Angkor Wat, watching countless sunsets over the Mekong River, boating alongside the Irrawaddy dolphin, rafting to Nong Khiaw in a makeshift bamboo raft, lounging on a secluded Thai beach.

I've always dreamed about doing this type of voyage--losing myself in the pace of travel, exploring cities and sites and smells and sounds so foreign to meand my sensibilities. My initial interest in culture brought me to the University of Colorado's doorstep over a decade ago to study anthropology and later for a master's in journalism and mass communications, and now, it propels me to Africa, next stop on my round the world journey.

At CU, I gathered a love for the colorful quilt of cultures that make up our planet. More than anything, my background in anthropology and communications gave me the gift of curiosity and empathy, knowing that the lens through which I see the world is limited and definitive. My common sense is someone else's confusion, and I emerged hungry to look at the world through another's viewpoint.

Now, I am out and about trying on many different pairs of eyes, slipping into another culture's skin, in hopes of raising my own awareness and compassion to create a more peaceful and equitable world. It's an exercise in really listening and in making the decision to find commonalities with people and places, who, on the surface, seem so very different from me.

So, whether you are out walking Norlin Quad, meditating at a wat, or sipping chai at the bazaar, open yourself to the journey of those around you: It's actually a small world after all.

To follow Gwendoline as she travels around the world, visit her blog. For more information on the CAS Foreign Language & Area Studies Fellowship, see our FLAS page.