Research on quantum states of matter could be conducted at room temperatures, thus facilitating cheaper and more widely available quantum technologies, research at the University of Colorado Boulder suggests. 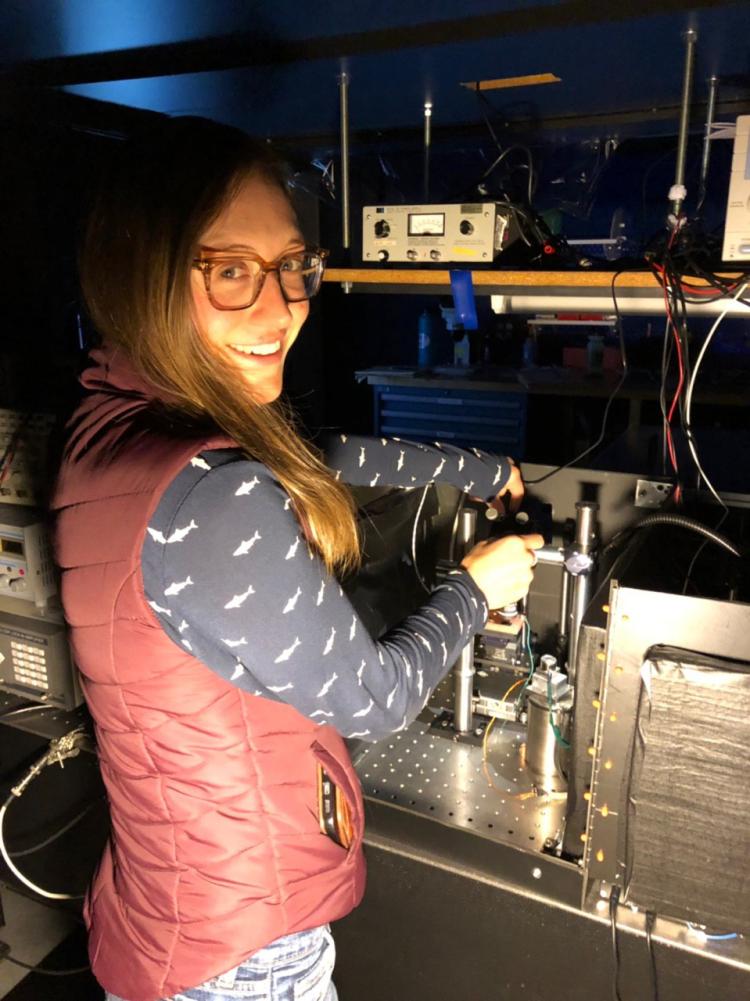 Graduate student Molly May aligns optics in the scanning probe apparatus that controls the quantum dot emission. Photo courtesy of Molly May. At the top of the page is an artist's illustration of tip-enhanced strong coupling for room temperature quantum technologies. Credit: Steven Burrows/JILA.

“This is exploratory research on quantum emitter put into novel very tiny optical nano-cavities. It allows for controlling quantum states even at room temperature which can create a wider range of quantum platforms and broader accessibility,” said Markus Raschke, CU Boulder professor of physics and JILA fellow.

“We are extending the application space of quantum technologies into more real world applications, operating even under ambient conditions, from sensing to new chemistry, which is really exciting,”

“If we want to use these technologies more broadly, it's so much cheaper, and would find so much wider use, if we were able to do it in your lab or your office or even your living room.”

Results of the research, which was done in collaboration with researchers at the University of Maryland, were published recently in the journal Science Advances.

But Earth is a warm place. “We live in a heat bath,” May joked, expounding on the basics of quantum research:

Despite their small size, atoms have the ability to carry and transfer information, which makes them a promising platform for quantum sensing, metrology and information processing.

However, artificial atoms in the form of “quantum dots" can also encode such information, andthe information in those quantum dots can equally be controlled with light, May explained.

But if controlling and working with atoms is restricted to cold temperatures, that would make it harder to take advantage of their quantum properties for wider range of applications outside of very specialized labs, added Raschke.

Writing on a nanoscale

The Raschke group works with quantum dots that are about 8 nanometers across, more than 1,000 times smaller than a human hair, but still much bigger compared to atoms. 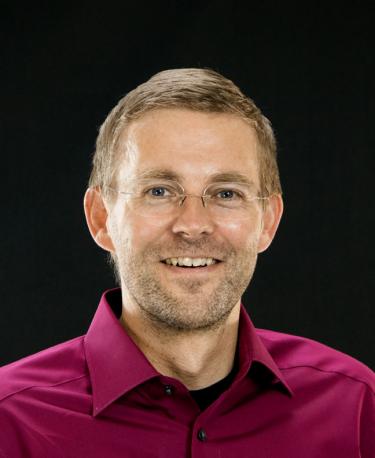 Writing information on a quantum dot involves changing its energy level from its ground state to an excited state. And photons—tiny packets of energy that make up light—can do that when they strongly interact or couple with the quantum state.

When we saw the first data, they were almost too good to be true. We almost did not believe the results and thought something had gone wrong, some artifact, something is fooling us.”

The other problem is, that over time, the movement and coupling of an atom or quantum dot knocks its excitation out of phase with the light field. That phase decoherence causes the atom to lose its information to the surrounding environment.

There are two ways to work around this. One option is to work in high vacuum and at ultra-cold temperatures, usually around a few micro-Kelvin, to reduce the chances of this phase decoherence.

The new approach, as pursued by the Raschke group, is to squeeze the light into a very small space, much smaller than its wavelength, in fact comparable to the size of the quantum dot. Using nanoscale optical antennas made by metallic nanostructures, you can create such an optical nano-cavity, squeezing the light into exceedingly small dimensions. Then almost magically, the coupling becomes strong and fast, faster than the loss of the information you try to write, May explained.

But those cavities are static. You either hit the quantum dot or you don’t, May explained. “Even when you get lucky and find a quantum dot, you cannot tune the cavity or control the interaction,” she added.

To work at room temperature and control the quantum state, May looked at an optical scanning probe technique, a technique already used at JILA that uses needle-like gold tip, as a tool to compress, or nano-focus, the light into the tiny space of only 10 nanometer in size at the tip of the needle, and as needed to get strong interaction with the quantum dot.

When she shines light onto the gold tip, it focuses it into that nsmall region at the tip apex, creating an optical nanocavity with the quantum dot sample positioned between the tip and a flat gold mirror.

“It works like the antenna in your phone, just for light. The tip nano-cavity collects the light that we shine on it and focuses it to a tiny spot,” May said.

The scanning probe microscope now provides the advantage that the tip can move around. So May can position the tip near the quantum dot with atomic precision. And when strong coupling sets in at very short distances between the tip and the quantum dot, the tip and the dot exchange information really well, tossing photons back and forth like ping-pong, May explained.

“As we come closer and closer to the quantum dot, we see that the coupling kind of kicks in,” May said. “I was actually impressed by how well it works. And, that really hasn't been done before. We can really optimize, control, and image the interaction.”

Raschke was surprised by the results. “When you do a new experiment in science, you don’t want to put your hopes too high that it would actually work as you envision, to limit your disappointment when it doesn’t. But when we saw the first data, they were almost too good to be true. We almost did not believe the results and thought something had gone wrong, some artifact, something is fooling us,” he said. “It was truly exhilarating when we saw the signal for the first time and gradually convinced ourselves it is real.”

Static cavities are like a picture—you may get some interaction but you can’t turn a knob to control it, making it of very limited utility. Now it is like in a movie. That strong-coupling effect using the tip lets May and her fellow researchers tune, control, and image the interaction with the quantum dot in real time and space. Pull the tip back, by a distance of even just one atom diameter, and the signal gets weaker. Push it closer, and the signal gets stronger.

Free from the fridge

Being able to write and read the energy level of a single quantum dot or atom using light is an enabling step for several emerging quantum technologies, like metrology and sensing tools. And breaking out of the ultra-cold regimes could help bring these tools out of the lab for wider applications, the team said.

The new method of cavity nano-optics won’t get rid of the need for research and technologies at low temperature because of other important virtues, Raschke clarified. But this finding expands quantum science and technology into new regimes at room temperature with complementary benefits. It also serves as a new tool to provide fundamental insight into how quantum information is lost in interacting environments, which can help optimize quantum systems more broadly.

Their paper was published in Science Advances on July 12. 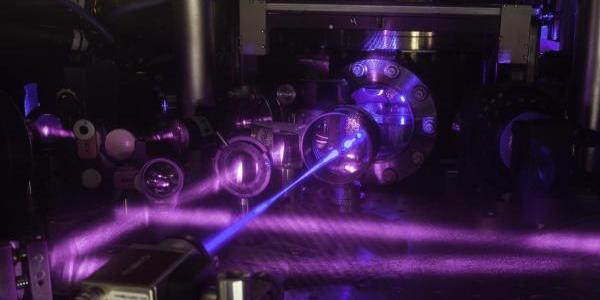 Physicists have created an atomic clock that reaches the same level of precision as its predecessors but is more than 20 times faster, promising dramatically improved measurements and more. END_OF_DOCUMENT_TOKEN_TO_BE_REPLACED 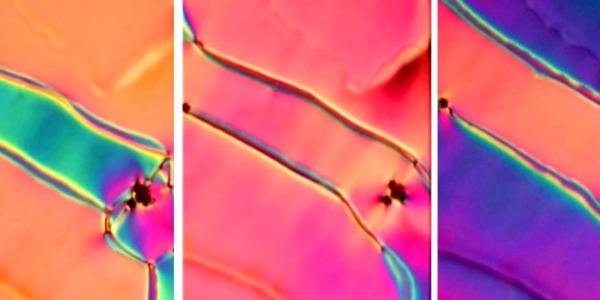 Researchers at CU Boulder’s Soft Materials Research Center (SMRC) have discovered an elusive phase of matter, first proposed more than 100 years ago and sought after ever since. END_OF_DOCUMENT_TOKEN_TO_BE_REPLACED 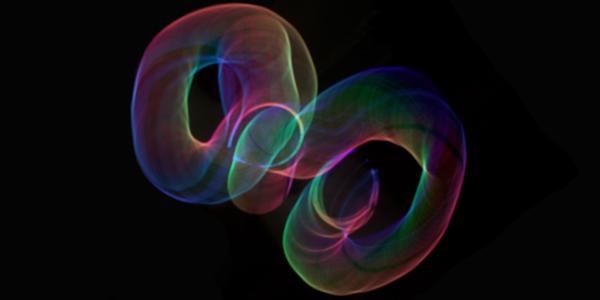 New research from a CU Boulder physicist might break open the mathematical puzzle that has stalled string theory research for decades END_OF_DOCUMENT_TOKEN_TO_BE_REPLACED
Tags:
Return to the top of the page