This is a hybrid event. To attend virtually, register for the Zoom link here. 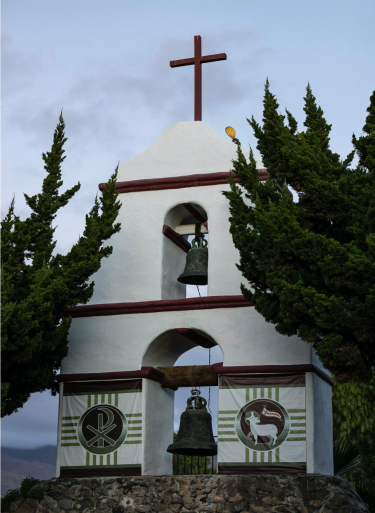 A recent California Indian movement to remove church bell symbols in the city of Santa Cruz underscored ongoing tensions between Native communities and public commemorations of the state’s Spanish history. Known as the El Camino Real Bell Markers, the symbols have become a nexus for reckoning with the colonial past. Valentin Lopez, Chairman of the Amah Mutsun Tribal Band, has charged, “these bells are deeply painful symbols that celebrate the destruction, domination and erasure of our people… They are constant reminders that our people and our history continue to be disregarded to this day.” Informed by consultations with California Indian scholars and community members, my presentation examines mission bell sounds and symbols in California, drawing connections between the sacred function of the bell within the Spanish mission sensorium and its late modern guise as a contested emblem of state identity and heritage. Situating the mission bell as a key tool of mass communication in the colonization and Christianization of Native peoples, I will explore simulacra like the El Camino Real Bell Marker, which continue to reinscribe historical violence for the California Indians.

Bernard Gordillo Brockmann, a native of Nicaragua, is a Postdoctoral Associate at the Yale Institute of Sacred Music. He holds a Ph.D. in historical musicology from the University of California at Riverside, and degrees in performance from Indiana University (Bloomington), the Guildhall School of Music and Drama (London), and Centenary College of Louisiana. His scholarship lies at the crossroads of music, culture, and politics in Latin America and its historical relations with the United States, taking a special interest in Central America. His book project, “Canto de Marte: Art Music, Popular Culture, and U.S. Intervention in Nicaragua” (under contract with Oxford University Press), examines the cultural impact of early twentieth-century U.S. intervention through the art and popular music, published writings, and social networks of Nicaraguan composer Luis Abraham Delgadillo. Other current projects include a study of music and socio-political liberation after Vatican II in Central American communities. He is a recipient of the Ingolf Dahl Memorial Award and a Fulbright Fellowship, and he has presented at annual meetings of the Society for American Music, American Musicological Society, and Society for Ethnomusicology. Bernard is also a professional harpsichordist who has performed in past seasons with the Los Angeles Philharmonic, Long Beach Opera, and the Canadian chamber orchestra Les Violons du Roi.