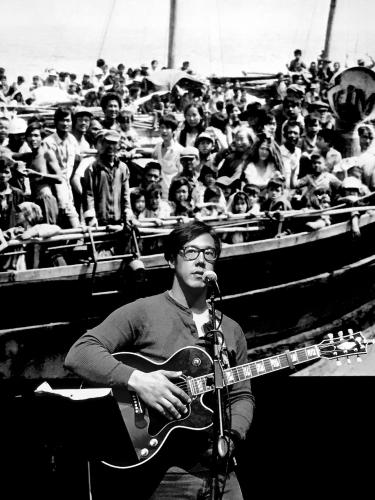 No-No Boy’s Julian Saporiti (pictured left) and Emilia Halvorson visit Boulder for a week-long residency on campus to share their work with students and faculty about Japanese American internment camp survivors and their stories.  Described as “an act of revisionist subversion” by NPR, No-No Boy is slated to combine original songs, storytelling, and projected archival images in their widely-anticipated, immersive multimedia free concert in Grusin Hall on Friday, October 11.  Their residency is funded by a grant from the Roser Visiting Artist Endowment.

No-No Boy gets its name from the Japanese Americans who were ordered to live in internment camps during World War II, soon after the Pearl Harbor attack in 1942.  Citizens incarcerated at these camps were deprived of their civil rights yet asked to serve in combat duty and swear allegiance to the US.  Those answering “no” to those two demands on the government’s Loyalty Questionnaire became “No No Boys,” and today are viewed as heroes for standing up to the government that deprived them of their freedom, liberty and justice.

Saporiti opens the residency on October 7 with "Transforming Scholarship into Song," an academic presentation that looks at how the No-No Boy Project has transformed ethnographic and archival research into a musical and performative experience. 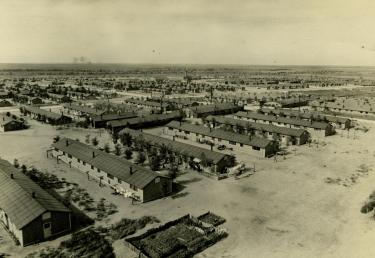 In conjunction with AMRC Director, Susan Thomas’s “Music and Incarceration” class this semester, Saporti and Halvorson will join the class and Professor Thomas in a field trip to visit Amache (the Granada Relocation Center and pictured right), one of ten Japanese American internment camps in the US during WWII.  Amache was in operation from 1942  to 1946 and confined up to 7,400 Japanese Americans at a time.

Saporiti takes inspiration for his work from his own family’s history of living through the Vietnam War, his doctoral work at Brown University, and interviews with World War II Japanese incarceration camp survivors. While on a national tour promoting their  2018 album, 1942, No-No Boy performed for asylum seekers and aid workers in Laredo, Crystal City (former home of a WWII Internment Camp) and Dilley, TX (current home to the largest family detention center).

The AMRC is beyond thrilled to host No-No Boy on CU campus this October and invities everyone--students, faculty, staff and the community--to their culminating concert on Friday, October 11.