Home Heritage Center Cabinet of Curiosities Where Was Camp Pitts? 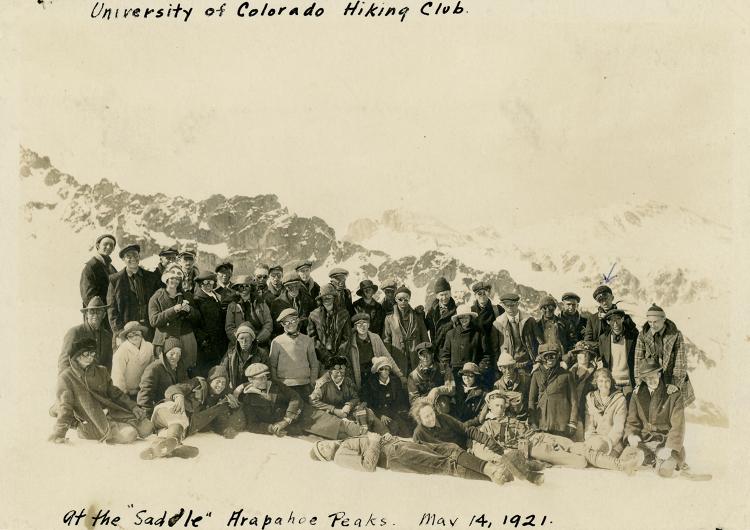 The annual three-day excursion to Arapahoe Peaks and Glacier began during Hiking Club's fledgling year in May 1920, and it quickly became their signature spring-time hike. Hiking Club scrapbooks make multiple references to a Camp Pitts in photographs and Silver & Gold newspaper clippings. It seems to have served as a kind of home base for the club, specifically for the Arapahoe trips. With so many mentions of Camp Pitts, we became a bit obsessed with trying to find out the location of this camp and its connection to the university.

Photographs in our collection show a very rustic cabin, so we thought that the camp might have initially had a connection to an old mine. That idea was quickly proved wrong after a few creative online search attempts, and a reference to a 1922 Handbook of American Private Schools came up. What did the Hiking Club have to do with a private school or a summer camp for boys?

Combing through the Handbook, it revealed some unexpected answers in addition to a whole new set of questions! The camp was run by a man named Ralph S. Pitts who was a teacher at Denver's East Side High School. He also had a small tutoring academy called Pitts School which he ran out of his home at 130 Grant Street in Denver. He established the camp in 1915 near Eldora along the trail over Arapahoe Pass. The camp was for boys from 12 to 18 years old, it cost $15 per week, and the staff of six could accommodate up to 50 boys. Weekly activities included mountain hikes and various sporting activities in addition to optional tutoring. This source did answer a few things; however, three key questions now came to light. Where was the camp located, what was the relationship between Camp Pitts and the CU Hiking Club, and just who was this Ralph S. Pitts? 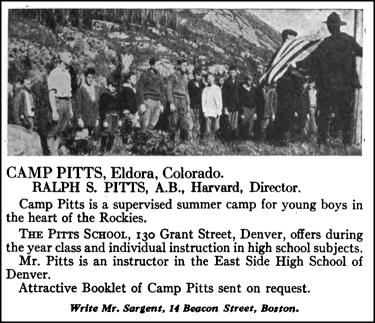 To find the area of Camp Pitts near Eldora, a trip to the Boulder County Clerk and Recorder's Office was in order. The Office's Recording Division records all land transactions in the county, so there should be some mention of Ralph S. Pitts purchasing the property. Quite a few deeds revealed Pitts actively acquiring land in addition to shares in various mining operations in the Grand Island Mining District northwest of Eldora. The property purchase of most interest was dated Nov 13, 1914. That coincides perfectly with the 1915 establishment date of 1915 for the camp. Now, the trick was in deciphering the "address" using the Public Land Survey System (also called the Rectangular Survey System). Using the legal land description (Section 18 in Township 1 South, Range 73 West) and Google Earth, the property lies outside of Eldora on the 4th of July Road within Section 18. Since the property is currently in private hands, we will not reveal the exact location of the original Camp Pitts.

Just for fun, we wanted to see if we could find the spot where a 1921 picture was taken. Thanks to Google Earth's ground-level view it confirmed the location of the camp against a photograph labeled "Arapahoe Peak from Camp Pitts."

Skimming club records the name Magnolia Pitts suddenly popped off of a list of people identified in a photograph. Could she somehow be related to Ralph Pitts of Pitts Camp? The photo was initially believed to be from 1920, but recent evidence reveals it to be from May 1921. Many people on the list did not become members until the 1920-1921 academic year and Ed Tangen, one of Boulder's most well-known photographers, was hired to take photos specifically for the May 1921 hike. This identification attempt was for a reunion planned for 1975. Nearly 50 years after the hikers posed for the image, the memories of the reunion organizers were amazingly only one year off.

A quick search of CU student directories and another clue fell into place. Magnolia had the same home address of Ralph Pitts and the Pitts School, 130 Grant Street, Denver. There was certainly some kind of connection here. A flip through the yearbooks and she is found graduating in 1923 after attending Radcliffe College for a year. 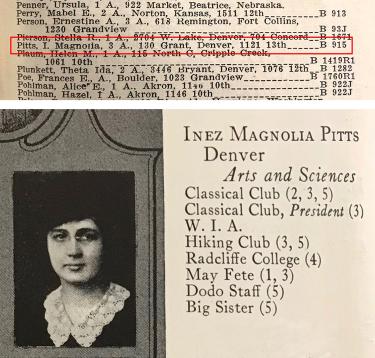 The following source to investigate was the first Hiking Club Minute book. It reveals a brief note during the January 1921 meeting that "Mr. Pitts invited [the] club to make headquarters at Pitts Camp." Skipping a few months forward Magnolia Pitts once again pops off the page, she is on the planning committee for the upcoming May 14, 1921, Arapahoe Peaks weekend trip. And who was in charge of lodging for the weekend? It was Magnolia herself. She became a Hiking Club member in November 1920, and she was almost certainly the conduit for organizing the first Camp Pitts and Hiking Club arrangement. 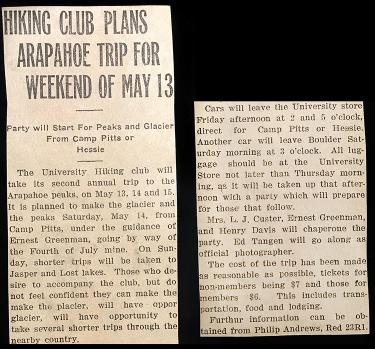 The collaboration must have been quite a success since Mr. Pitts extended an invitation to all club members to visit Camp Pitts over the summer. The following year Camp Pitts was secured for the May Arapahoe trip, with a special mention that Mr. Pitts, a friend, and Ruth and Malcolm Pitts would be part of the journey. Assuming that Magnolia was Ralph Pitts' daughter, Ruth and Malcolm were her siblings. Magnolia even secured a Christmas holiday house party at the camp in December 1922. It is not clear how long the arrangement lasted, but Camp Pitts was used during the Arapahoe hikes at least through the late 1920s, even after Magnolia graduated in 1923.

Who was Ralph S. Pitts?

Some time on the Ancestry.com website reveals that Ralph Shaw Pitts was born in Cambridge, Massachusetts to Lemuel and Mary Hammond Pitts in 1873. When Ralph was young, his father was in the produce business, and the family moved around the greater Boston area over several years. He attended Adams Academy in Quincy, Massachusetts before his acceptance into Harvard in 1891. Ralph graduated in the spring of 1895 with a degree in Education. 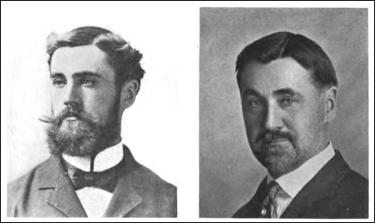 That fall, he married Inez McCallum in Newton, Massachusetts. Soon he and his young wife headed to Denver, Colorado where Ralph first tutored at, then took a teaching position at East Side High School in 1896. The same month Ralph became faculty, his first child, Ralph Jr. was born, but unfortunately, he only lived for one year. He and Inez had four more children, Inez Magnolia, Rolfe, Ruth and Malcolm. For many years Ralph taught Latin, Greek and Psychology at East Side High and later became the Assistant Principal. He opened Camp Pitts in 1915 but World War I seemed to have caused him some difficulty during the camp's formative years. Around 1920 Ralph developed a small private tutoring school, Pitts School out of his home with two other teachers. He worked at East Side High until his retirement in 1943 but continued his tutoring until three weeks before his death in 1956.

What ultimately happened to Camp Pitts is not currently known. Do you have any photos or connections to Camp Pitts or the family of Ralph Pitts? We would love to hear your story!