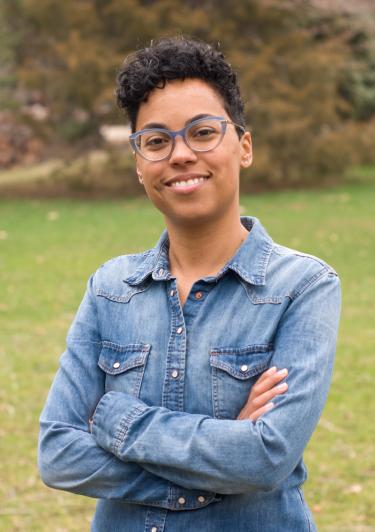 Professor Soares’ work focuses on 19th-21st century Latinx literature and media, with a specialization in queer Caribbean cultural production. Her current book manuscript – Joyful Protest: The Political Work of Positive Affect in Latinx Cultural Production – examines the use of affects traditionally coded as “positive” in Cuban and Puerto Rican diasporic cultural production from the 1960s to the present, to argue that while they are often disregarded as frivolous and apolitical, positive affects have at times been central to sociopolitical critique. Professor Soares is also currently working on a project that examines how discourses of lesbianism and criminology were interwoven in early 20th century Latin American feminism. Her work has been published in Frontiers, Letras Femeninas, Revista de Estudios Hispánicos, Remezcla, and The Los Angeles Review of Books.

Professor Soares’ teaching draws heavily on queer and performance methodologies. She encourages students to “try out” intellectual concepts using their bodies, through decolonial pedagogies such as the Theatrical Jazz Aesthetic and Theatre of the Oppressed. She also facilitates performance poetry workshops in schools and juvenile detention facilities. Her own performance work is invested in making political statements in and through the body Her most recent performance project is a play she co-wrote with her writing partner, Katrina Ruiz, entitled Arroz con Mango. The play offers a humorous but poignant depiction of growing up queer and Cuban in Miami.

“Dominican Futurism: The Speculative Use of Negative Aesthetics in the Work of Rita Indiana.”
Forthcoming in Meridians: Feminism, Race, Transnationalism.

“Latin Lovers, Chismosas, and Gendered Discourses of Power”: The Role of the Subjective Narrator in Jane the Virgin.”
Forthcoming in Decolonizing Latinx Masculinity. Eds. Arturo Aldama and Frederick Aldama. Tuscon: U of Arizona P.

“Garzona Nationalism: The Confluence of Gender, Sexuality and Citizenship in the Cuban Republic.” Frontiers: A Journal of Women’s Studies 35.3 (2014)

“The Political Implications of Playing Hopefully: A Negotiation of the Present and the Utopic in Queer Theory.” The Un/Making of Latina/o Citizenship: Culture, Politics and Aesthetics. Ed. Ellie D. Hernández and Eliza Rodriguez y Gibson. New York: Palgrave Macmillan, 2014.

“’Who Do I Have to Forgive to Move On From This Place?’: Meditations from a Third World Feminist Lesbian.” Queer Girls in the Class: Lesbian Teachers and Students Tell Their Classroom Stories. Ed. Lori Horvitz. New York: Peter Lang, 2011.