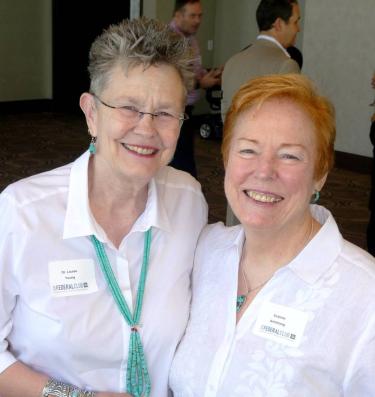 Two trailblazing LGBTQ activists met with the students from our Introduction to LGBTQ Studies class, to discuss their lifetime of advocacy and their relationship which began at CU Boulder 50 years ago. Vivienne Armstrong and Dr. Louise Young visited virtually on Tuesday, October 12th, in this class taught by Dr. Emmanuel David, co-director of the LGBTQ Studies Program. Their visit coincided with National Coming Out Day, and gave the students a chance to have a "conversation across generations," and to learn more about the personal histories of these two powerful women.

"They met in April 1971, here in Colorado," Dr. David explained, "and in the decades that followed they've dedicated considerable time and energy to bringing about a more just world for those within the LGBTQ community."  Louise was a graduate student at CU Boulder studying geography, living in a boarding house behind The Sink, and Vivienne was working as a nurse in Denver, when they found themselves at the same Conference on World Affairs program on 'lesbianism'. "Believe it or not, the panel was all men," Vivienne noted, "and the women who were in the Gay Liberation Front at that time, we felt very strongly that there should be women represented on that panel, and not just men." A few of the male panelists stepped down, allowing Vivienne herself to take a seat on stage at Macky Auditorium. It was here when Louise and Vivienne first noticed each other, but they didn't get the chance to speak to each other until another chance meeting at a Gay Liberation Front meeting on campus a few days later.

It was organizations such as the Gay Liberation Front, as well as publications like The Ladder and ONE, that helped LGBTQ-identified people connect with each other, Vivienne and Louise explained, and noted that these early organizations and publications were born from the Stonewall Riots that took place in June 1969. "From my point of view," Louise adds, "I really didn't have much awareness when I went to Boulder in the fall of '68. The anti-Vietnam war movement really was what was predominant on campus at that time." They pointed out that much of the campus organization surrounding LGBTQ issues didn't exist much before Stonewall, and even afterwards, most of the publications and organizations they relied on were not based in Colorado, but on either coast.

After Louise graduated CU Boulder with a PhD in Geography she had expected to stay on as a faculty member at the small Oklahoma college, but the department dismissed her, claiming low enrollment numbers. Vivienne herself felt discrimination in her own job, and when Louise was offered a position with Texas Instruments, the couple immediately relocated. "We very soon became activists, because there's nothing like being stung to end up saying, 'Hey! You know I got I got a dog in this fight!', as they say here in Texas. And so we very quickly became activists, both politically and socially." Louise became the first open LGBTQ person on the Texas State Democratic Executive Committee, which "makes decisions about the way that the State Party will be run," she explained. She also served as a delegate to both the 1980 and 2000 Democratic National Conventions, "and it was very exciting for me to see even the changes that took place in that 20 year span, and how much more open the Democratic Party was on a national level." While Louise was employed with Texas Instruments, and later Raytheon, she was involved with workplace activism, and helped implement several non-discrimination policies and create domestic partner benefits in the defense industry. She also developed new branding with the Human Rights campaign for corporations to adopt, encouraging them to achieve "100% on the Corporate Equality Index," and mathematically proved that companies with non-discrimination policies enjoyed higher productivity from their employees. 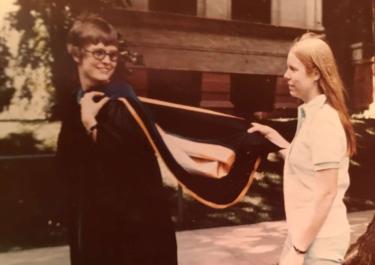 Vivienne holds Louise's PhD hood on the day of her graduation, August 1975

It was coalition politics that Vivienne and Louise believe is what allowed them to make strides even in a conservative place like Texas. "Nobody gets anywhere doing anything by yourself," Vivienne remarked, and explained how they came to form the Lesbian Gay Political Coalition of Dallas, which had very broad support with women activists in their community, and worked to form relationships with other activist groups supporting Hispanic, Black and Asian communities. "It took coalescing and working you know politically with everybody to be able to to get them to understand us, and for us to understand their needs and to work together politically."

Vivienne's own political activism was noted by then Dallas-mayor Annette Strauss, who appointed her as a board member to the Health and Human Services Commission in the 1980s, which enabled her to secure funding and resources for people with HIV. "It was really nice to be able to see both sides my life coming together, both my professional life and my community efforts, to be able to get care for people who needed care. If I had not been working within the women's community, I don't know that Mayor Strauss would have even known who I was! So it all kind of comes together -- when you work together, you get good things done."

"I think that's good advice," Louise added, "and if you do want to make changes in the world and continue activism, that you remember the words that we have said -- that coalitions are so important and building coalitions with like-minded groups that have also suffered discrimination is very important. Be interested in issues other than just LGBT+ issues, that's very important."

Vivienne and Louise then discussed several of the cultural changes they have noticed surrounding LGBTQ issues in the past 50 years, including media representation, ever evolving terminology, and the increasing visibility of LGBTQ people in political office. They were pleased to witness the change in acceptance of gay marriage in the U.S., and discussed their own struggle in having their relationship legally recognized. Vivienne explained that after both their 2000 Vermont Civil Union and 2008 marriage in California, "we still had no legal rights in Texas. And so the Supreme Court in June of 2015 solved all of our legal problems, finally, because they recognized same sex marriage in all states."

When asked what makes them hopeful for the LGBT community in the future, Vivienne quickly answered, "You! The fact that you are in a class, that CU has a class -- you are our future! The fact that you can study [LGBTQ] history and know more, is what makes you able to go out there and change the world. It all happens one person at a time, each one of you has the ability to change something, somewhere, and make the world a better place."