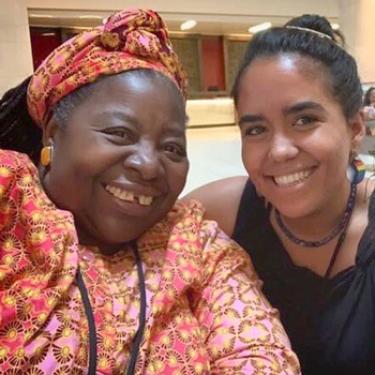 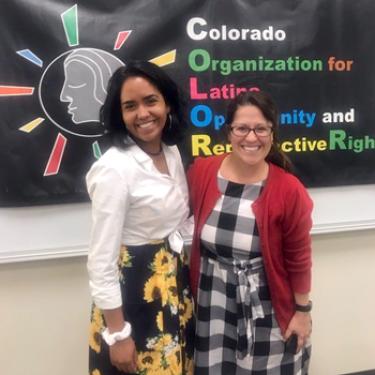 WGST student Mariana Galvez Seminario led a discussion and workshop on the origins, history, theory, and contemporary applications of reproductive justice in the Cottage library on Thursday, February 27th. Mariana is a junior double-majoring in women and gender studies and sociology, with a minor in political science, and is also an active member of the Gender Justice League, our WGST student practicum group.

Mariana was volunteering with a campus organization working to destigmatize abortion care when they crossed paths with members from the Colorado Organization for Latina Opportunity and Reproductive Rights (COLOR), "a community-rooted organization that works to enable Latinx individuals and their families to lead safe, healthy and self-determined lives." Mariana shares that upon finding COLOR, " I immediately fell in love with their mission and with the team. I felt that I found a family and found the work I wanted to do in my life. Ever since then, I have done whatever I can to work for the needs of my community–especially regarding the reproductive lives of women of color and QTPOC."

Mariana's work with COLOR has included assisting with canvassing and fundraising projects, being a member of the COLORado #1in3 Youth Council, and working as a policy intern during the 2019 legislative session. Mariana also contributed to the conversation on abortion access and its stigma in the Latinx community as a guest speaker on the Spanish-language radio program Mujeres de COLOR. They were chosen to represent COLOR at the SisterSong's "Let's Talk About Sex" conference in October, where they were highly inspired after spending time together with Loretta Ross, the founder of SisterSong who originally coined the term 'reproductive justice'.

Mariana has been invited to present their talk "Reproductive Justice and Racial Disparities in Reproductive Healthcare and Abortion Care" at the Colorado Doula Project's semi-annual training in Denver, which helps teach abortion doulas more about supporting patients through abortion, while also discussing health disparities and reproductive justice. This summer, they have been accepted into the highly competitive 2020 Ralph Bunche Summer Institute, a 5-week academically intensive summer program at Duke University sponsored by the American Political Science Association and designed to introduce undergraduate students from under-represented racial and ethnic groups to the world of doctoral study in political science.

What is Reproductive Justice?

SisterSong defines Reproductive Justice as the human right to maintain personal bodily autonomy, have children, not have children, and parent the children we have in safe and sustainable communities.

Reproductive Justice was coined in 1994 by a group of black women gathered in Chicago who recognized that the women’s rights movement, led by and representing middle class and wealthy white women, could not defend the needs of women of color and other marginalized women and trans* people. They begain their own national movement to uplift the needs of the most marginalized women, families, and communities, and named themselves Women of African Descent for Reproductive Justice. Rooted in the internationally-accepted human rights framework created by the United Nations, Reproductive Justice combines reproductive rights and social justice. In 1997, SisterSong was formed to create a national, multi-ethnic RJ movement.

Learn more about SisterSong and Reproductive Justice at https://www.sistersong.net/reproductive-justice