Alicia was also named the inaugural Social Sciences Employee of the Month, for her devoted and effective management of our department, and her work as an advocate for the college staff as a whole. The award included an extra day of vacation, and the presentation of "Rowdy" by David Brown, Dean of Social Sciences (Rowdy, pictured here, where it currently resides on Alicia's desk). 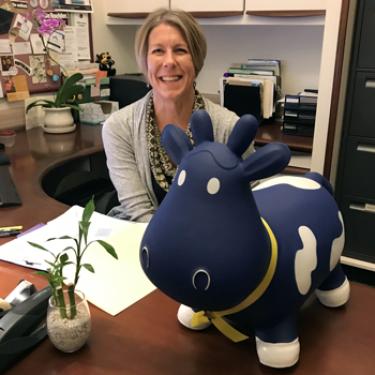 Dr. Lorraine Bayard de Volo has been promoted to Full Professor, based on her significant accomplishment in teaching, research, scholarship and service. She is currently enjoying a semester-long sabbatical away from  teaching and her duties as Chair of Women and Gender Studies.

Dr. Emmanuel David has been promoted to Associate Professor. Read more about his recent Best Should Teach award.

Dr. Samira Mehta traveled to Jeonju Korea to give her talk “Christian-Jewish Blended Families: A Multicultural Case Study” for the conference "Religious Conflict and Coexistence: The Korean Context and Beyond.” Read more about our newest WGST professor.

Dr. Deepti Misri gave a talk in October titled “Imagining Crip Futures in Kashmir“ at a conference on Time, Space and Memory organized by the Institute For Religion, Culture, & Public Life at Columbia University. Her journal article "Showing humanity: violence and visuality in Kashmir" was recently published in Cultural Studies, and she co-wrote the article "Kashmiri Pandits must reimagine the idea of return to Kashmir" for Al Jazeera this August. Professor Misri will be moderating and presenting at two roundtables at the National Women’s Studies Association conference in San Francisco this November. Along with members of the Critical Kashmir Studies Collective, she will be on a roundtable titled “Decolonizing Solidarities: The Case of Kashmir,” which has been selected for a “Presidential Session” at NWSA. She will also be on a roundtable “On the Legitimacy of Protest: Kashmir, Palestine, Black Lives Matter”. 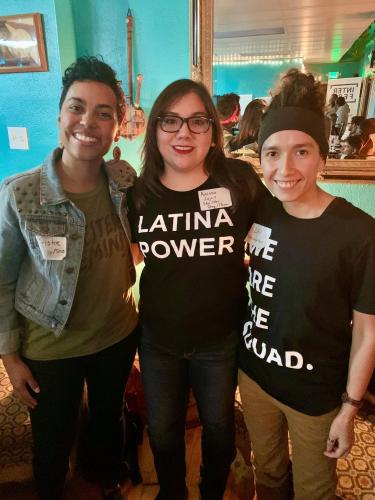 Dr. Kristie Soares has a new article, “Incomodando: On the Role of Bothering in Rita Indiana’s Speculative Work,” forthcoming in ASAP/J special cluster on Latinx Speculative Fiction. She has been involved in recent community workshops including facilitating the Embodied Playfulness Panelist and Workshop at InterFest in Denver, co-facilitating the Deconstructing Creative Genius Roundtable at Tilt West in Denver this October, and was a part of the Worldscape: Latinx Voices panel at the Jaipur Literature Festival in Boulder this September.

Dr. Robert Wyrod was invited to present his talk "Gender and the Precarity of China-Led Development in Africa" at the Institute of Behavioral Science Speaker Series on Monday, October 21st, sponsored by the Program on International Development. This talk examined a rural Ugandan setting that is being transformed into a China-funded industrial park, revealing how Chinese development is intertwined with, and in several respects exacerbates, existing gender inequalities in this locale. He discussed the shifting entanglements of gender and development in the twenty-first century and how China’s developmental pragmatism is producing forms of gendered uncertainty that are distinct from Western development efforts.

Dr. Robert Wyrod was recently featured on The China in Africa Podcast. Listen now to the episode "A Cautionary Lesson About Chinese Manufacturing in Africa," where he discusses the environmental and human costs of these new industries, as he witnessed in the small Ugandan village of Kapeeka.

Wyrod recently authored two articles: "The role of health in confronting toxic masculinity," which was recently included in a series exploring the effects, presentation and evolution of masculinity in contemporary African society by the Firoz Lalji Centre for Africa at the London School of Economics and Political Science; and "In the General’s Valley: China, Africa, and the Limits of Developmental Pragmatism", which appeared in Sociology of Development.

Celeste Montoya, Jill Irvine and Sabine Lang
Rowman & Littlefield Press, 2019.
With an emphasis on gendered mobilization, this book looks at movements traditionally understood and/or classified as singularly gendered as well as those organized around other dimensions of identity and oppression or at the intersection of multiple dimensions.

Deepti Misri
Cultural Studies, Vol 33, No. 3, 2019
This paper examines the burst of visual production that emerged from and around Indian-occupied Kashmir in July 2016, when the Indian paramilitary and police began to implement for the first time a tactic of mass blinding as a way of quelling surging protests against the Indian state.

Celeste Montoya, Sarah A. Gershon, Christina Bejarano and Nadia Brown
Politics, Groups, and Identities 7(3):642-653. 2019.
In the last several elections, there has been a substantial diversification of political candidates both at the national and state level, particularly in the Democratic Party. This includes record numbers of female and candidates of color. While there is much debate about the role that identity should play in elections, there is much evidence that the identity of candidates does matter in ways significant for democracy.

In the General’s Valley: China, Africa, and the Limits of Developmental Pragmatism

Robert Wyrod
Sociology of Development, Vol. 5 (2):174-197. 2019.
Since the turn of the millennium, China has significantly expanded its foreign aid and investment in Africa, decentering the West as Africa’s main development partner. Wyrod examines how the new Chinese presence in Africa is both embedded in and altering everyday social relations, using the example of a rural setting in Uganda that is in the midst of a large-scale transformation into a China-funded industrial park.


"Kashmiri Pandits must reimagine the idea of return to Kashmir"

Deepti Misri and Mona Bhan
Al Jazeera, August 2019.
The return of the Kashmiri Hindu population which fled in the 1990s should not turn into a colonisation of Kashmir.

"The role of health in confronting toxic masculinity"

Robert Wyrod
Firoz Lalji Centre for Africa at the London School of Economics and Political Science, October 2019.
Health crises in Uganda have decreased with few changes in masculinity, with masculine sexual privilege remaining largely intact. But can health be a potent catalyst for addressing complex gender power dynamics? Professor Robert Wyrod discusses these issues in his contribution to a series exploring the effects, presentation and evolution of masculinity in contemporary African society.

Sociology professor Rachel Rinaldo has recently been promoted to Associate Professor. Her latest book chapter, “Democratization and Women’s Activism in Indonesia,” will be included in the upcoming book Activists in Transition: Contentious Politics in the New Indonesia, edited by Thushara Dibley and Michele Ford.

Donna Mejia of Theatre and Dance has recently been promoted to Associate Professor. Mejia also serves as director of graduate studies in dance.

Natalie Avalos is the chancellor's postdoctoral fellow in the Department of Ethnic Studies, and her research includes Native American and Indigenous religions in diaspora, healing historical trauma, Indigenous feminisms, settler colonialisms, and decolonization.

A. Marie Ranjbar is an assistant professor of geography, and her interests include decolonial and postcolonial feminist theory, feminist geopolitics, critical human rights, and theories of justice.

Strength from Within by Melanie Yazzie, CU professor of Art & Art History and WGST affiliate, was installed at its temporary home at 15th Street and Pearl. The work is a self-portrait of Yazzie’s and reflects her state of mind when working to improve things through thought and prayer. As a printmaker, painter, and sculptor, Melanie Yazzie’s work draws upon her rich Diné (Navajo) cultural heritage. Her work follows the Diné dictum “walk in beauty” literally, creating beauty and harmony. 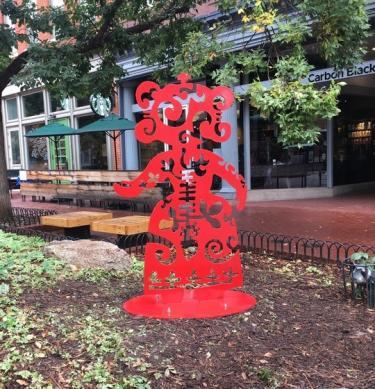 pictured above: Strength from Within by Melanie Yazzie, WGST affiliate faculty and professor of Art & Art History 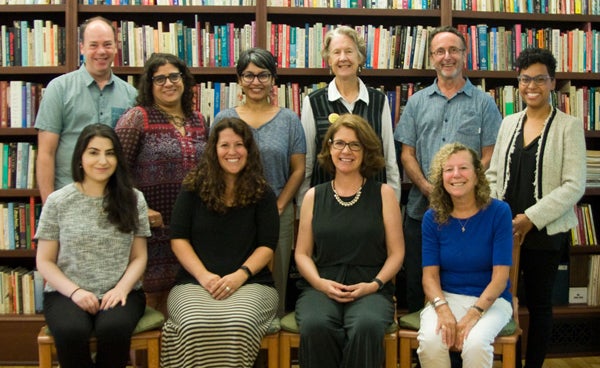 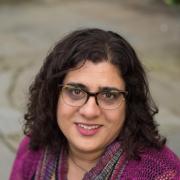 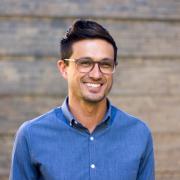 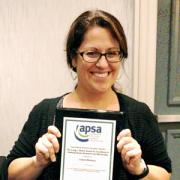