Transform The World: What you can do with a degree in women's studies 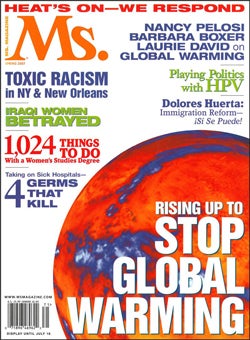 a) Become the first woman president of Harvard University

b) Win a Rhodes Scholarship to study sexual civil rights

c) Advocate for domestic-violence survivors while starring on TV's Survivor

d) Teach the next generation

e) All of the above, and more

It’s a typical question from parents, fellow students and even faculty: What can you do with your college degree? In an era of conservative impediments to progressive liberal arts education, a field such as women's studies seems a particularly common target for that query.

Recently, we have had at least one excellent role model to point to: Drew Gilpin Faust, the first woman president of Harvard. She may have earned her Ph.D. in American civilization, but she was formerly chair of the women's studies program at the University of Pennsylvania and founding dean of the Radcliffe Institute for Advanced Study. Under her leadership, Radcliffe-Harvard's former women's college-has become an interdisciplinary research center supporting "transformative works," with a special commitment to studying women, gender and society. In a similar fashion, many women's studies majors tend to intermix their fields of concentration in order to craft distinctive careers aimed at transforming our world.

How many women's studies grads are we talking about? According to the National Center for Education Statistics, in the 2003-2004 academic year U.S. institutions of higher education granted 1,024 bachelor's degrees, 13 5 master's degrees and five doctoral degrees in women's studies. These statistics, however, are suspect, given that the National Women's Studies Association (NWSA) has documented 750 active undergraduate and graduate women's studies programs in U.S. colleges and universities.

Earlier studies of women's studies graduates, such as that by Barbara F. Luebke and Mary Ellen Reilly in their 1995 book, Women's Studies Graduates: The First Generation (Teachers College Press), were similarly concerned with documenting the value of such degrees. They found that the fact that women's studies majors and graduates were persistently asked what could be done with their degrees reflected a continuing ignorance about women's studies as an academic discipline. In their study, Luebke and Reilly were also able to document a unique set of skills learned through women's studies programs: empowerment, selfconfidence, critical thinking, building community, and understanding differences and intersections among racism, homophobia, sexism, classism, ableism, anti-Semitism and other types of oppression.

Moya Bailey, a B.A. in comparative women's studies at Spelman College (the first historically black U.S. college to offer a women's studies major) and now a Ph.D. student in women's studies at Emory University, has already been able to use some of her women's studies skills in community action. While at Spelman, Bailey participated in "The Nelly Protest," a nationally publicized demonstration against misogyny in hip-hop music and videos.

That and other protest actions were so meaningful to her that, as a doctoral student at Emory, she has studied how "intentional communities"-like the nurturing spaces often created by women's studies programs-assist marginalized groups to develop much-needed critical and political perspectives. Within 10 years, she hopes to be teaching women's studies at a historically black college or university, "adding gender, class and sexuality as important pieces of the conversation within an African American community context."

Similarly, Harvard undergraduate Ryan Thoreson hopes to develop a career focused on the intersection of multiple concerns. As a dual major in government and women/gender/sexuality studies, Thoreson believes that women's studies will enrich his planned practice of international sexual civil-rights law. "In my government courses I learned about political theory, but I found the political theory I learned in my women's studies curriculum to be much more broadly applicable," says Thoreson, a Rhodes Scholarship winner. "If I had only majored in government, I would not come to legal and policy questions as thoughtfully, wanting to understand the social and cultural context of groups affected by the law."

Maria Bevacqua, associate professor and chair of the Department of Women's Studies at Minnesota State University, Mankato, believes that women's studies has carved out a niche in the area of applied theory and practice. Like many programs, Mankato's women's studies curriculum includes internships in feminist organizations and collective action projects for course credit. Bevacqua -who has her own women's studies Ph.D. from Emory-has seen her program's graduates do everything from working in human service agencies to opening feminist businesses. Moreover, women's studies graduates act as "ambassadors of feminism, bringing the women's studies perspective into the rest of the world."

Beverly Guy-Sheftall, founding director of the Women's Research and Resource Center and professor of women's studies at Spelman, has increasingly seen students take women's studies into the public sphere. "In the early years, women's studies graduates tended to work on gender-specific issues, getting jobs in battered-women's shelters and rape crisis centers," she says. "But more and more we have students going into public health, international policy, journalism, electoral politics, filmmaking, K-12 education and other careers that allow them to effect large-scale change."

Guy-Sheftall has also seen students increasingly desire to be public intellectuals and media producers, so much so that Spelman has incorporated digital media production into its women's studies curriculum. "I think we are going to see many more women's studies graduates going into film and television, and many of our students already produce documentaries-even if they choose to do something else as a career."

Deborah Siegel, author of the forthcoming book Sisterhood, Interrupted: From Radical Women to Grrls Gone Wild, has noticed the same thing. She observes that in the 1970s, "women's studies was about bridging the divide between scholarship and activism. This current generation is bridging scholarship, activism and media."

Becky Lee is representative of this new generation. After acquiring a B.A. in women's studies from the University of Michigan in 2000, Lee went on to law school and then worked as an advocate for domestic violence survivors. While doing this work, she was approached to audition for the popular reality TV show Survivor. Thinking it could serve as a good platform for her cause, she joined the cast, and while she found that most of her statements on domestic violence got left on the editing floor, she has used the Survivor experience to expand her advocacy.

"I came in third and used my $75,000 prize to found a fund for domestic-violence prevention with a special focus on immigrant women from marginalized communities," she says. "Now when I make public appearances for the show, I talk about the fund as a way to raise the issue of domestic violence for mainstream audiences."

So what can you do with a degree in women's studies? Perhaps transform enough minds through feminist education that this question is no longer asked.

Nikki Ayanna Stewart is a Ph.D. candidate in women's studies at the University of Maryland. She is completing a dissertation titled Visual Resistance: African American Girls, Visual Media, and Black Feminist Education.