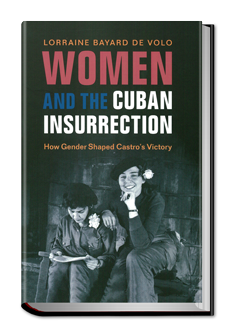 In her latest book Women and the Cuban Insurrection: How Gender Shaped Castro's Victory, Dr. Lorraine Bayard de Volo focuses on previously unexamined narratives of war, using gender as a category of analysis to describe both the historical place of women in war, and how gender plays into the tactics and cultural constructs of war.

Her research into Cuba began as part of a larger project comparing the gender, war, and peace processes across Latin America, which was partially funded by the National Science Foundation, the United States Institute of Peace, and the University of Kansas. She conducted fieldwork in Mexico, Nicaragua, Colombia and Cuba which included interviews, participant observation, and examination of archives. "As I turned to the Cuban materials," writes Bayard de Volo, "I became convinced that an in-depth case study of conflict and militarization in that country was necessary before I could develop an effective comparative analysis across cases."

In exploring women's contributions to war in Cuba, Bayard de Volo doesn't solely provide us with a women's history of war, but rather documents a fuller and more complete account of history, giving us new perspectives on both the "war of bullets" as well as the "war of ideas." She uncovers previously ignored histories of women involved in clandestine forces and guerrilla warfare as well as those in supporting roles on and off the battlefield, examining how each were important to the war effort, and in doing so "shatters the Cuban War story's mythology of an insurrection waged and won by bearded guerrillas alone."

Author and professor Cynthia Enloe writes of Bayard de Volo's book, "she has made me look afresh at women's revolutionary activism outside the mountains, at Castro's tactical gender equity, and at Che Guevara's commitment to militarized masculinity. Everyone interested in war, revolution and feminist research will have their eyes opened by this new book."