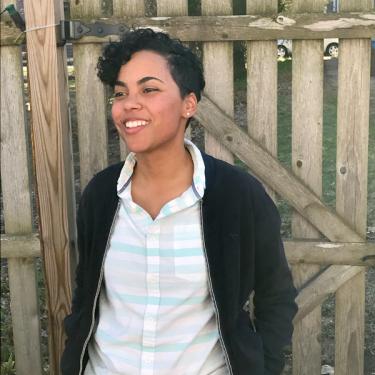 Soares explores issues of queerness in Caribbean and Latinx communities both through her research and work as a performance artist. Coming to us from the University of Massachusetts Amherst’s Spanish & Portuguese Program, Soares is no stranger to the CU Boulder campus, having earned an MA in comparative literature as well as the graduate certificate in women and gender studies before heading to the University of California, Santa Barbara to complete her PhD. "The graduate certificate gave me a broad background about the various types of feminisms," notes Soares. "In my research I look at four different nations across a period of over 100 years. The graduate certificate gave me the tools to understand how feminism changes and adapts to different times and places."

Soares’ work has been published in journals such as Frontiers, Letras Femeninas, Revista de Estudios Hispánicos, Remezcla, and she contributed chapters in several books, including her latest “The Cuban Missile Crisis of White Masculinity: Tito Bonito and the Burlesque Butt,” forthcoming in The Routledge Companion to Gender, Sex and Pop Culture in Latin America. Her first sole-authored book, Salsa Epistemology: Embodied Playfulness as Cultural Resilience, which is currently under review, engages with salsa—a music and dance tradition—to show how embodied playfulness figures as an integral part of queer activism in the Spanish Caribbean diaspora.

This semester, Soares is teaching Gender, Sexuality and Popular Culture, which examines television, film, music, and print texts including I Love Lucy, All in the Family, Beyonce videos and West Side Story to analyze how popular culture both produces and is produced by the world around it. In the fall, she will be teaching both Women of Color in Activism, and a new course Latina/x Studies, which will draw from work produced by and about Latina/xs, and discusses the social and cultural construction of Latina/x race and ethnicity alongside gender and sexuality, nationalism, migration and citizenship. The class will look specifically at Latina/x literary production and theory, historiographical trends, Latina feminist theory, and Latina/x political organizing using readings from Gloria Anzaldúa, Cherríe Moraga, Carmelita Tropicana, José Esteban Muñoz, and others.

Earlier this month, Soares presented the talk "Capitalism con Salsa: Money and Popular Culture in Pitbull's Miami" for an event sponsored by the Latin American Studies. Soares presents evidence of Spanish Caribbean music’s connection with capitalism, termed “capitalism con salsa”, which rejects the futurity of capitalist progress narratives that consistently posit the future as the site of consumer fulfillment. Soares investigates how Cuban-American rapper Pitbull accesses capitalism con salsa through his popular catch phrase “dale” – a Spanish language version of carpe diem. Through his philosophy of “dale” Pitbull playfully reorders the timeline of capitalism in his music and videos, in turn destabilizing progress narratives that damage Latinx subjects by displacing happiness in a distant, richer future.

Soares is also an active performance artist, invested in making political statements in and through the body. She encourages students to “try out” intellectual concepts using their bodies, through decolonial pedagogies such as Spoken Word Poetry and Theatre of the Oppressed. She also facilitates performance poetry workshops in schools and juvenile detention facilities, and says "I’m looking forward to getting involved with the performance community in Boulder and Denver. This spring I’ll be participating in the Higher Education Perspectives series run by Denver Center for the Performing Arts, which brings together professors to discuss provocative works by local Latinx playwrights.”