Women of the Storm: Civic Activism after Hurricane Katrina 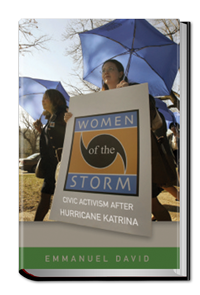 About the author: Emmanuel David is an Assistant Professor of Women and Gender Studies, and the co-director of LGBTQ Studies at the University of Colorado Boulder

Book description: Hurricanes Katrina and Rita made landfall less than four weeks apart in 2005. Months later, much of New Orleans and the Gulf Coast remained in tatters. As the region faded from national headlines, its residents faced a dire future.

Emmanuel David chronicles how one activist group confronted the crisis. Founded by a few elite white women in New Orleans, Women of the Storm quickly formed a broad coalition that sought to represent Louisiana’s diverse population. From its early lobbying of Congress through its response to the 2010 BP oil spill, David shows how members’ actions were shaped by gender, race, class, and geography. Drawing on in-depth interviews, ethnographic observation, and archival research, David tells a compelling story of collective action and personal transformation that expands our understanding of the aftermath of a historic American catastrophe.

“Women of the Storm pulls back the analytical curtain on one of the most unusual post-Katrina political movements. Drawing on firsthand observations and in-depth interviews, David reveals how privileged white New Orleans women used their philanthropic and volunteer skills to create a genuinely interracial alliance that could effectively pressure members of Congress to invest in the city’s and the whole coastal region’s revival. Here is a book for anyone doing intersectional digging into gendered social movements, congressional lobbying, or postdisaster politics.”—Cynthia Enloe, author of Seriously! Investigating Crashes and Crises as if Women Mattered

"Women of the Storm is an important 'studying up' investigation of privileged women in post-Katrina New Orleans. It offers a rare, in-depth look at the volunteer political labor of elite women. Engaging and well written, David focuses on micro-level processes and presents careful descriptions of events and dialogue to illuminate issues of power, inequality, diversity, gender, social class, and politics. Women of the Storm is a truly valuable addition to the field of gender and disaster."—Alice Fothergill, coauthor of Children of Katrina

"This fascinating book describes a courageous group of elite women who took the risk to bridge race and class divides, stand together, and take collective political actions that were fundamental to the recovery of New Orleans. David captures their hopes and deliberations, intelligence and limitations, and joie de vivre with candor and compassion—a beautiful achievement."—Rebecca E. Snedeker, coauthor of Unfathomable City: A New Orleans Atlas

“The book’s unique focus centers on the well-orchestrated activities of an elite group of women as they defined and acted upon their roles as community leaders to invite, entice, and cajole national leaders to see for themselves the block-by-block evidence of Hurricane Katrina’s destruction. It makes a substantial contribution to the study of social class and women’s activism while raising important questions about inclusion and exclusion, and how a community represents itself.”—Beth Willinger, coeditor of Newcomb College, 1886-2006: Higher Education for Women in New Orleans