From Global to Grassroots: The European Union, Transnational Advocacy, and Combating Violence against Women 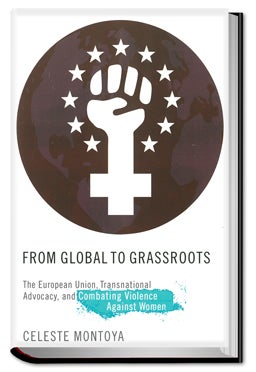 About the author: Celeste Montoya is an Associate Professor of Women and Gender Studies at the University of Colorado Boulder.

Book description: From Global to Grassroots looks at how transnational activism aimed at combating violence against women is being used to instigate changes in local practice. Focusing on the case of the European Union and its efforts to establish women’s human rights, this study provides empirical and intersectional feminist analysis of the transnational processes that connect global, regional, and grassroots advocacy efforts. This book first traces the processes by which violence against women became a European Union issue, examining the role played by global movements and organizations as well as European advocates within and outside of EU institutions. Second, it explores and analyzes the strategies of norm diffusion, coercive pressure, and capacity building utilized by the EU to influence its member and candidate states to change practices. Third, it evaluates the impact that these strategies have at the local level by investigating the interaction of international and regional efforts with domestic characteristics. While other studies have emphasized formal policy change as evidence that domestic change has occurred, this study looks beyond the rhetoric to examine the extent to which violence against women is addressed, paying special attention to the disparate impact that different strategies may have on particular groups of women.