As part of the It's On Us campaign to bring awareness to sexual assault on college campuses, Vice President Joe Biden visited CU-Boulder on Friday, April 8th to ask students, faculty, and alumni to "make a personal commitment to step off the sidelines and be part of the solution" by practicing bystander intervention and defeating rape culture. The vice president also led the hundreds of attendees in a pledge to "recognize that nonconsensual sex is sexual assault, to identify situations in which sexual assault may occur, and to create an environment in which sexual assault is unacceptable and survivors are supported."

Biden was joined by several other speakers on stage, including Senator Michael Bennet and Chancellor Phil DiStefano, as well as director of the office of victim assistance Jessica Ladd-Webert, CU Boulder Title IX coordinator Valerie Simons, and Daymond John, CEO of FUBU. A few student speakers were also picked to share their thoughts with the crowd, including Women and Gender Studies major Samantha Miller. 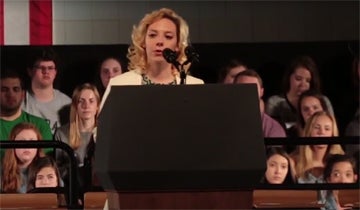 In her address, Samantha thanked the CU administration and the vice-president for bringing awareness to the issue of sexual assault on campus and acknowledged the Gender Justice League for their tireless work on campus to raise awareness of issues that affect women, including promoting the Denim Days event that was held the following week. Denim Days, a week of activism aimed at challenging victim blaming and rape culture on our campus and beyond, includes a display of jeans and denim patches decorated by students to help bring awareness to these problems. Samantha remarked that "sexual violence is an issue that for too long has been ignored and minimized within our society," and denounced rape culture in our community, "a culture," she says "that teaches us the sight of mass murder is headline news, while the sight of a woman breastfeeding is profane; a culture which teaches young women how not to be raped instead of teaching young men that rape is categorically unacceptable," bringing cheers of support from the audience. She ended her speech by saying it is indeed on us to change our culture, "to come together in support of human dignity and the right to live unburdened by undue violence and trauma, not because she is your sister or mother, but because we choose to live in a world that values life equally."

We welcome you to watch the video of Samantha's speech, available on our YouTube channel.